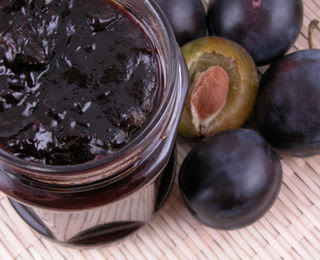 I've been preserving and canning food for a while now. I'm no expert but I've had pretty good luck so far with applesauce, chutney, jellies, and all kinds of jams.

Yep, I just had a couple of large batches of jam fail spectacularly.

This summer we had a HUGE crop of plums in our yard from just two plum trees. Stupendously big crop. SO. MANY. PLUMS.

So we decided to try to make plum jam. This is not a jam I'd ever made before. A friend made me plum jam from a different type of plum a few years ago and I didn't like it at all. Thus, we'd never tried plum jam with our plums...but we were ready to try anything to get rid of all these plums!

So we made a few successful batches of plum jam, and I tried a little on toast one day. WOW. I was so surprised. I loved this plum jam. I think the difference was ours was made with Italian plums which makes a delicious, thick, extremely flavorful jam. I immediately knew I'd be making more.

We finished picking all the rest of the plums...we got like 3-4 big buckets more. So we decided to make several batches of jam, using up the last of the regular pectin (Sure-Jell) in my cupboard. The first batches went well, no problems. The last batch, though, was a full-sugar recipe (which I rarely use because I find it too sweet). But I was out of my preferred pectin, and I'm loathe to waste food. So we winced and made full-sugar plum jam. We thought we followed all the directions correctly, but in the end it never gelled.

So now I had a whole bunch of jars full of plum syrup. This is not something I am likely to use. I have some raspberry syrup from a batch of raspberry jelly that didn't set up a couple of years ago and we are still trying to use it up. Mostly we add it to lemonade to make Raspberry Lemonade, but it doesn't take much so it takes forever to use up. All those jars of Plum Syrup were never going to get used.

So I thought, let's see if we can remake that jam and get it to set up properly.  I'd never done this before so I did a little research and found some articles online.

Keep in mind, the information below is pertinent only to jams with an added pectin like Sure-Jell (either the pink box or the yellow box).

Cooked jam without any added pectin is another story entirely and not covered here; Food in Jars is a good website for that type of jam. Directions for remaking jams with Pomona Pectin can be found on the Pomona Pectin website.

General information about different types of pectins and the pros and cons of each can be found in my article on pectins. This article gets a lot of online traffic so hopefully people are finding it useful.

Why Gelling May Fail 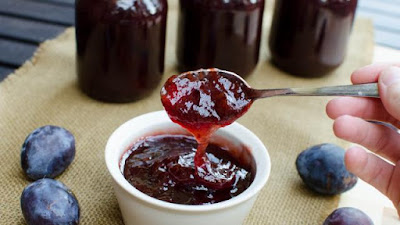 When it comes right down to it, making jams and jellies is really a chemistry experiment. Certain reactions are needed in order to make gelling action happen. Basically you cook up mashed fruit, then add a certain amount of sugar, acid, and pectin in order to make those reactions happen. Get the balance right and you get lovely jam or jelly. Get the percentage wrong and you get a runny mess.

Fruits naturally have some pectin in their cell structures, especially in the skins and seeds. The goal of cooking the fruit is to break down the pectin in the individual fruit so it can then build a mesh with the pectin from other fruits. This makes a gel where fruit bits are suspended in a latticework of pectin.

Here is a quote about the process from a science blog:


The whole chemistry of jam making is all about making this pectin that's in the fruit break down and become water soluble. That then recombines, and all of those hydrogen bonds that are holding it together recombine in a chemical reaction with the fruit acid and with the sugar, and that makes a lovely network that forms a gel, and that's the kind of jelly-like substance of jams.

So you need to get that chemical reaction right, the pectin amount right, the fruit acid right, and the amount of sugar right so that you make the right consistency of that network that will hold your jelly together, your jam together, so you don't get fruit sauce.

Fruits that are naturally high in pectin and acidity like quince, underripe apples, red currants, cranberries, and gooseberries are an exception. They often don't need anything except cooking in a little water to set up and gel.

Here are a few reasons why an added-pectin jam of most other fruit may fail to set up/gel:
Bottom line, if your jam didn't set up, the most likely cause is that you were out of balance with your sugar/acid/pectin, or you didn't cook it for the right amount of time. However, there are a few other nitpicky mistakes that even experienced jammers can make. If you have a significant jam failure, review the list and see if any apply. 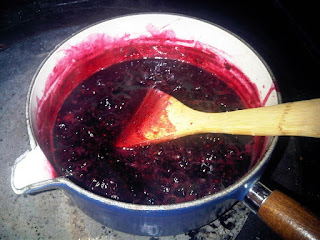 Whatever caused your syrupy jam, don't throw it away. Even very experienced jammers have had batches fail, so they have certain techniques for fixing a failed gel. They don't always work but they are worth a try. The following is the most commonly recommended technique for remaking jam.

First, be sure you have everything you need ready to go ahead of time. This includes a canner full of hot water; funnels, jar-lifters, and ladles clean and ready to go; extra new lids for the jars; and enough extra sugar, pectin, and lemon juice to remake the jam.

Open the lids of the runny jam (these lids cannot be reused for canning). Pour the jam out into a glass measuring cup until it makes a total of 4 cups. Clean the old jars in soapy water and rinse, or use new clean, sterilized jars.

Mix 1/4 cup sugar, 1/2 cup water, 2 tablespoons bottled lemon juice, and 4 teaspoons powdered pectin. Heat up until it has been brought to a rolling boil.

Add the 4 cups of syrupy jam. Stir continuously until the whole thing has been brought to a rolling boil. Keep boiling for at least 30 seconds more, but don't overboil.

Remove from heat, ladle into jars, put on NEW lids, add screwtops, then can in a waterbath canner for 10-15 minutes, depending on the size of the jars. Turn off heat and let jars sit in water for 5 more minutes, then immediately remove jars straight up out of the canner without tipping them. Put them on a towel on your counter overnight.  Don't check or tip them until 24 hours have passed.

Some people report that chia seeds can be used to thicken up a runny jam, if you are open to that. Personally, I dislike chia seeds so I have never tried this but if you like them it may be worth a try. 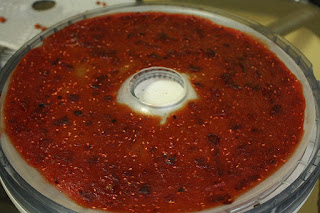 Sometimes you can seemingly do everything right and a jam will simply not set up. Who knows what went wrong? All you can do is give it your best shot at redoing it. About half to two-thirds of the time, you can fix a runny jam. Sometimes you never do. Don't be afraid to just give up and call it Syrup at some point. Feel free to pretend that's what you wanted all along. Plenty of cooks before you have done the same!

Don't throw away your results. People use syrupy jam as toppings for pancakes, waffles, ice cream, yogurt, or desserts like poke cake. Our family sometimes adds it to lemonade to make a special drink during the summer. It can also be dehydrated into fruit leather, like above. Or you can add a little corn starch and use it as a glaze for roasted meats. It's surprisingly tasty as a glaze with pork in particular. (If that sounds weird, think about cranberry sauce with turkey at Thanksgiving. Same principle of fruit with savory.)

My first try at remaking syrupy plum jam was a mixed success. Some of it came out perfectly; no problem with the set the second time around.

However, about half of it didn't set again. Oh well. Considering how many batches of plum jam we made, that still left me with a lot more Plum Syrup than I wanted. On the other hand, we saved half the batch. I consider that a win.

I'm not quite sure why some batches failed in the original jam. My guess is we got sloppy in our measuring because of how much fruit there was and used too much fruit at once. I also think the last batch of pectin was from an older box. Also, my daughter helped, so she may have cooked it too long; I'm not sure. But at least we were able to rescue about half of the runny batches and remake them properly.

The rest of the syrupy jam we just made into Plum Fruit Leather, using both the oven and a dehydrator. Same great flavor, and at least we didn't waste it!

via The Well-Rounded Mama https://ift.tt/2PTEbkp
Posted by Notes From The Fatosphere at 02:29