I saw this image a couple of weeks ago and spluttered. 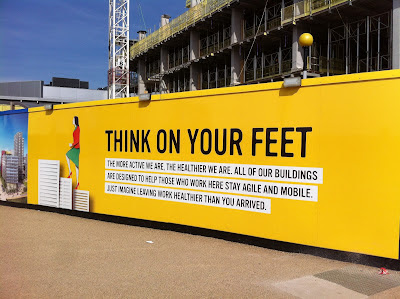 It's in the Olympic Park, which is not really a park, more a collection of sites being prepared for corporations and social cleansing with some mega sports complexes and token greenery sprinkled inbetween. I live close to this place but it's really inaccessible unless you ride a bike. I know three people who have been killed whilst riding their bikes in my part of town so I no longer ride a bike. Plus, I have no reason to visit this zone of dead culture, and names like Cheering Lane (for real) give me the creeps.

The image is on a billboard in a new area of the not-park where a load of office towers are being built. I spluttered because, like so many things connected to the Olympics and its sticky residue, bad shit is being presented as progressive, bright, shiny, desirable and good for you. To me, this image looks like the latest iteration of obesogenic environments.

In 2013, geographers Rachel Colls and Bethan Evans published a critical take on the concept of obesogenic, which had spread like wildfire towards the end of the first decade of fat panic aka the global obesity epidemicTM. Within this rhetoric, obesogenic environments are those which make people fat and where there is little opportunity for physical activity. They believe that fat people are fat because we don't move our bodies. One of the ways in which planners and policy-makers hope to reduce the number of fat people in the world is by creating spaces that demand physical activity of its inhabitants. This is regarded by anti-obesity proponents as a soft way of engendering public health because people don't even notice it is happening.

Except they do. Especially if they are pushing pushchairs, are on wheels, have mobility impairments, and so on. The bridge leading into the Olympic Park from Stratford has a giant set of steps and two escalators that are frequently broken. There are two lifts that are hidden round the back of a grim passageway. The planners may well have wanted people to take the steps but the reality is that if you can't take them, or don't want to (refusal is not on the cards) the options are very limited. Now, I may be wrong here, but in my version of a Brave New World, dystopian though it may be, at least there is access for all, but this version can't even come up with a level surface. It is retrograde, controlling and non-consensual. It's not that I don't want to live in a place where I can walk in nature and feel connected to my body. What I don't want is the assumption that enforced exercise is the answer to my problems.

Back to the image, how to deconstruct it? Here's some stream of consciousness: I feel sorry for this poor woman who is being made to climb steps all day in high heels. Are her feet bleeding, do you think? Is she sweating? Will she be able to catch up with the men in her department, especially the inevitably white male dominated upper management structure? The steps run out, which makes it look as though she's about to hit the glass ceiling there. I wonder where workers who use wheelchairs will get into the building, round the back? Maybe workers will find a loophole of some kind, perhaps they still have unions and will campaign for proper access, even though I know that's wishful thinking. What's so great about being agile and mobile anyway? But at least she is lovely and slim, I imagine she has to be, fat people aren't welcome in the kinds of places where she works. "The more active we are, the healthier we are," unless you have chronic fatigue, problems with compulsive exercising or are simply human and need a rest sometimes. And who is this "We" they're talking about?

The kicker is a masterpiece of copy writing: "Just imagine leaving work healthier than when you arrived". Just imagine! Work does not make you healthy, it is what sucks the life out of you, especially the kind of work that is going to take place in this location. Work is a system of exploitation and the sale of labour. This is not healthy. In fact, if this is what passes for healthy, we are all truly fucked.

via Obesity Timebomb http://ift.tt/1TcXVzb
Posted by Notes From The Fatosphere at 10:00