People will always show you their true colors…eventually!

It’s true, people show us their true colors all of the time, but I’m quite certain that we ignore all those signals more often than not. It’s not in their words, usually, but definitely in their deeds and behaviors. I’m big on body language and pay close attention to the physical signals people give as they interact with me. It’s how I know who the fat hating bigots are at work and who’s actually super cool. Ha-ha! Friendships can boom and bust and grow and fade and we’re often left with more questions than answers. I know I certainly have been there, quite a bit a few years ago. What can you do? They showed me their true colors. They forced me to make a choice. They proved to be untrustworthy, or worse. I didn’t escape abuse to welcome it into my life willingly later on. Nope! Next!

Okay, but really this post is about my dating life because that is where I’m shifting some focus these days. What dating life, you might ask? Yeah, I know, I try and give up so quickly that it’s hard to keep up, let alone make any sort of sense of. That person I had that best first date ever with suddenly ghosted me for a week. It was odd, we had been texting every day for weeks. Really we had a terrible date, on a Friday night. Took them to my favorite Italian restaurant and they showed up late & high and had to leave an hour later because their wife was ill. And hey, I totally understood, but their behavior was bullshit. They barely talked and kept checking their phone. It was like a completely different person than the one I had had 3 amazing dates with. Oh well.

When they text me 8 days later with only, “Afternoon! :D” I waited two days to reply, “Afternoon.” I had thought to not text back at all, but I do love a bit of confrontation or at least to let them know I’m not into their fuckery. But no such explanation occurred, so what can ya do?! When they asked how I was I simply said, “Oh you know, just livin’.” and they haven’t responded since. I doubt they will. Too bad, they were a great person to talk to and a helluva great time to make-out with. Next!

Now I’m seeing someone else and having the time of my fucking life! This one is also married and open/ethically non-monagamous, but while the same age as the last one, far more mature and together. Their communication is open, honest and enthusiastic! And ain’t that just the way? People who want to be in your life will tell you, will show you, and will try their best to actually be in your awesome life! It’s almost like magic! And while this person and I get along swimmingly, the connection we’ve made in our short acquaintance is mostly physical (not to mention fucking fantastic! Ha-ha!). I’m not in this one for the feels and for the first time in a long time that feels right! It also FEEEEEEELS right! Ha-ha!

I had had a regular date a couple of weeks ago. I had matched with someone on a few different dating apps and had chatted a bit but it fizzled. Then they popped back up to apologize and explain and decided we should meet up. I was game, they were nice and cute and age appropriate (I might have a hangup about dating folks not yet thirty, wev!). We met outside of the local Egyptian museum in the garden, which was gorgeous as it was also sunset. However, they showed up sweaty in a tank top and shorts (cycling gear really) and checked on their bike twice in the not quite 90 minutes we hung out and chatted. I think we’re attracted to each other, but have very little at all in common. They had invited me to come to their apartment to play some Classic NES the following week but then never reached out to sync on the details. Oh well. Next!

Closure is a scam and we never truly get what we think we need. And the truth is we don’t actually need it! I know that may be a radical notion to some, certainly my own mind screams at the thought, but I’m certain of it now. Our brains will try as they might to finish the puzzle, especially if you have past traumas or PTSD-C as I do. Whew! My lil’ brain-o was on the struggle bus for real when the shit hit the fan at my last job. There was zero logic involved in how that situation went down, but my brain worked so hard for months to make it somehow make sense, but it never could because there was none to be had.

Our feelings are valid, regardless of the situation at hand. How someone makes you feel is real, but if their actions don’t match their words, be on high alert, my lovelies! It’s not worth sticking around for it to really kick you in the pants, I promise. There is so much more life to be had and experience and enriched! There are good people out there! Seriously! They may seem few and far between, but the good ones, the tried and true ones, they are always worth the wait. Trying to force it just never works and why put forth effort where it isn’t wanted anyway?! Nah, I’m done with all of that. I’m here for realness and sincerity, honesty and vulnerability, I’m here for the good and juicy bits of life that shine for me when I know I’m heading in the right direction. 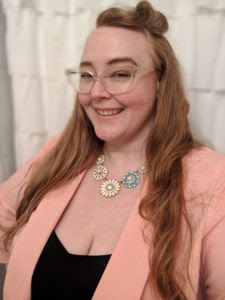