A monthly rundown of the fat characters in films I saw this past month, but haven’t written articles about.

Part of this heist caper includes the main gang of thieves getting detonation materials from a low-level crime boss ironically named Skinny Pete (Gawtti).  The transaction includes Left Ear (Mos Def) awkwardly trying not to stare at him.

Four short vignettes threaded together by one Dachshund.  One chapter focuses on a disconsolate film professor/screenwriter Dave (Danny DeVito) who is despised by his students and ignored by his agents.  One scene includes a visit to his (off-screen) doctor who orders him to lose weight and exercise, to which Dave repeatedly and forlornly insists, “I can’t.” 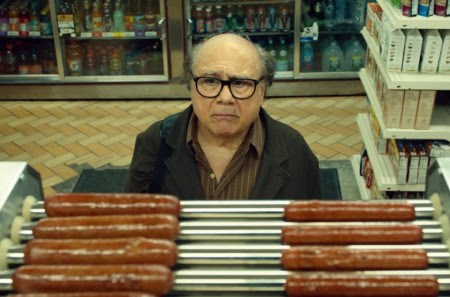 A caper that plays like a live action cartoon, starring Bruce Willis as the titular Hawk, a cat burglar who gets wrapped up in a scheme that defies explanation.  Hawk’s friend Five-Tone (Danny Aiello) is the butt of a few fat jokes over the course of the film, as are a few fat security guards that Hawk has to outsmart during his jobs.

via Consistent Panda Bear Shape http://ift.tt/2aMJm3e
Posted by Notes From The Fatosphere at 20:36