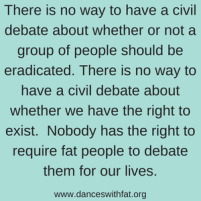 Alan Linda was a columnist for a local paper.  Then he decided he would jump on the bandwagon of people who write fat-shaming pieces about sitting next to fat people on planes in his “humor” column. The paper apologized for having published the piece in the first place, and then they fired his fat-shaming ass.

Before 27 constitutional scholar trolls leave comments about “free speech,” let me remind you that “free speech” means that Congress shall make no law abridging the freedom of speech.  It doesn’t mean that newspapers are required to publish harmful bigotry and bullying.  Nobody is guaranteed a platform for their speech, and nobody is guaranteed consequence-free speech.  So you can be a fatphobe, but if you wish to do it in writing, you may find yourself without a newspaper willing to help you get your message of weight-based oppression out to the masses.

In fact, we already acknowledge that there are constraints on free speech based on its effects, because if I yell “fire” in a crowded room where there is no fire, my speech can hurt people and I’m responsible for that. So too, articles that seek to perpetuate oppression are harmful,  so good for this paper for refusing to be used as a tool for oppression.

In terms of the ways that airlines and their passengers treat fat people, I’ve covered that here, here, and here, but the bottom line is that fat people deserve the same thing that everyone else already gets, which is transportation from one place to another in a seat that accommodates them.  If the fact that the airlines aren’t providing that inconveniences thinner people as well, then their problem is with the airline, not with the fat people (and tall people, and broad-shouldered people) who are not being offered the same service that the thinner people feel they deserve and should expect, but don’t think others should get.

The larger issue here is that bigotry and bullying – whether it’s in speech, or writing, or executive order – should not be tolerated.  The argument “I want to oppress you, and you don’t want to be oppressed. See we both have valid, differing opinions and we need to respect each other’s opinions” is bullshit.  “I like cherry ice cream and you don’t” are two valid differing opinions.  “I think that my rights to life, liberty, the pursuit of happiness, and basic human respect are inalienable, but yours are debatable ” is just straight up oppression.

Key to this situation is that the author not only didn’t learn from it, or even attempt to offer an apology. Rather, “Asked to comment on his release, Linda e-mailed that he didn’t understand what the dispute was about.”

For their part, the paper did understand what it was about, and they released a statement to prove it:

Bullying others is not OK. Body shaming is not OK. Racist views are not OK. Homophobia is not OK. The list goes on, but you get the picture. Let’s debate the issues, not make personal attacks on people.

The Daily Journal is more than a newspaper. We are people — people who care about this community and we come in all shapes and sizes. Not one person here at the Daily Journal likes or agrees with body shaming. Ever.

It’s unfortunate that the paper published this in the first place (according to their statement the editor was out sick and the staff published it because it was a regular column, and they’ve taken steps to avoid this in the future) but I appreciate that they saw their mistake and took appropriate steps.