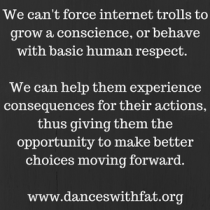 Jessica Davey-Quantick, a Burlesque dancer, posted videos of a performance along with pictures of herself in costume to her social media.  A troll started leaving inappropriate comments. By the following morning more trolls had joined in.  According to Davey-Quantick the most prolific troll told her that she should “slit my own wrists and eat my own blubber.”

This is often the time when people chime in to tell the person being bullied that they should “turn the other cheek,” or to “just be positive,” or that they should not “feed the trolls” by talking about what’s happening to them. Each person who deals with trolls and bullies gets to choose how they want to deal with them, and these are completely valid choices.  But they’re not the only choices.

In my experience (which includes everything from the lazy “fatties gonna fat” style trolling, to having entire forums and websites dedicated to trolling me personally, to having people show up where I’m at to video and photograph me and my family) ignoring bullies allows them to bully in peace with no push-back. I’m pretty sure that the person who started telling people that “ignoring the bullies will make them go away” was, at best, never bullied and, at worst, a bully trying to pull one over on us.

Jessica took a different approach. She said “I am over the idea that we have to somehow protect the individuals [involved],” And to prove it, she found the first troll’s father and headmaster, and she let them know what was going.  The dad started off apologetic and then later claimed his son wasn’t involved, chided Jessica for calling him out, and said that if she didn’t want to be abused she should lock her Instagram account. Sooooo, lying and victim blaming…I guess the troll doesn’t fall far from the tree.

She found greater success with the Headmaster.  It turns out that, as is so often the case, the trolls were children – which doesn’t make their behavior any less harmful, but does help to explain the mentality of doing it in the first place.  Several of them attend Westminster School, an exclusive private school that was “appalled” to find out that their students behaved this way.  So appalled that they suspended the three boys and they’ll be reviewing the boys hand-written apology notes before they are sent to Jessica.

The main troll had already reached out to let Jessica know that they had been suspended, and lost their phone privileges. According to Jessica:

“More importantly, he was so apologetic. And I got this email from him basically telling me he is so ashamed of himself. He is so ashamed that he has done this to his parents, to his friends, that he doesn’t do this normally, and that he’s learned his lesson.”

This is the best possible outcome.  Unfortunately we can’t force internet trolls to grow a conscience, or behave with basic human respect.  One thing we can do, if we choose, is to help them experience the consequences of their actions, thus giving them the opportunity to make better choices moving forward.

For her part, Jessica is committed to helping trolls experience “the army of feminist flying monkeys who descended upon him like a glittery wave of retribution.” She says:

We have to start opening up, because these people who do it generally have private pages and you can’t imagine them sitting down at dinner with their parents and their spouses or their girlfriends and saying, ‘Well, what did you do today honey?’ ‘Well, today I told someone to kill themselves on the internet. Pass the peas, please.’ So we need to take it to their world. We need to make it something they have to own. Not just us.

via Dances With Fat http://ift.tt/2kwC06P
Posted by Notes From The Fatosphere at 03:56