I don’t even know how to start writing this post. I want to say so much and yet nothing feels right about saying anything at all. Definitely going through a major transitional phase right now. It’s another of my famous avalanches of life stuff all at once, ya know?! Breakup/s, financial fallout (thanks IRS), death in the family, illness for me…At least things at work are good. Ha-ha! It really has been a month of trying to laugh my way through the hard shit that keeps flying at me. *sigh* 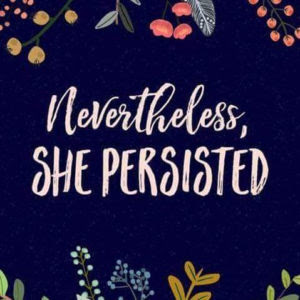 I just keep on keepin’ on, always have and probably always will. My bff J said to me last week, “You’re like a dung beetle. It doesn’t know it’s dealing with shit, it just gets shit done!” it was a compliment, but also a bit of a wake up call for me. I wasn’t allowing myself the space to breathe let alone rest and so my illness was more severe and long lasting, and, well, I’m still recovering.
I started this year off with the resignation of pushing myself out of my comfort zone as much as possible and that’s been working well…for the most part. It was kind of amazing to see my awkwardness reach it’s pinnacle at a recent modeling audition. So, a great friend talked me into going to a modeling audition, which was interesting,but fun! Until the very last part…we were supposed to line up and each do a serious runway walk in front of the designers and then the same but a freestyle walk to show off your personality/moves/etc. I did the serious walk fine but then as one person was ahead of me for the very last one I got a fucking nosebleed and had to run to the bathroom! Like of course! No one else would have that shit happen! It was almost over and I just couldn’t get the bleeding to stop. So embarrassing, but also hilarious! I swear my life is a sitcom! 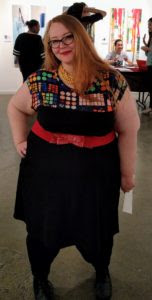 Tigress took this pic of me right after the audition ended. Post bloody nose!
Yeah, you read that right, I went through a breakup (technically two a month apart). Not much to say about it other than it was time and it was mutual. Dipping my toe back into the single life was exciting at first, but then I was very suddenly struck down with a nasty virus that had me bed ridden for 7 days solid. I’m still sort of dumbstruck by how hard that was and still is, to be honest. Nothing permanent, just a really nasty virus and a cough that won’t quit. It’s going around. What really sucks is being in a good place with myself while trying to meet like minded folks, but finding that is a taller order than I realized. People just can’t be real and my bullshit meter goes off and I…just…cannot! UGH! 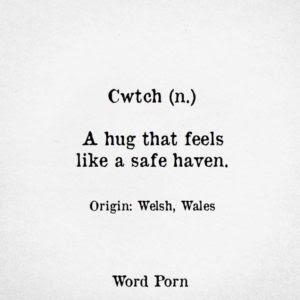 Being so sick has forced me to rest, to give myself space, and to be patient with recovery. Yesterday was really the first time I’ve been out of the house and not at work since that modeling audition! I met up with the bffs for Drunch and revelry and had a blast! Finally got to see Trainspotting 2 and it did not disappoint! I’m still processing all the feels that washed over me during the entire film! Ahhh! So good! So necessary! So glad I got to see it with my two favorite people, too! By the time I got home last night my voice was shot from laughing and coughing all damned day! ha-ha! 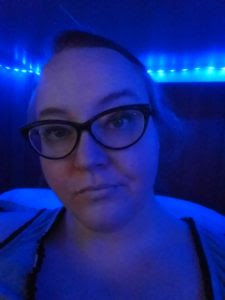 This is my “I’m sick and everything is terrible” selfie. Ha!
So yeah, I’m single again! Watch out world! Ha-ha! I’m definitely taking a new approach to this whole dating thing. Especially now that I’m working and meeting folks in San Francisco. It’s very different than silicon valley was, for sure! Mostly I’m just enjoying meeting people of all walks of life. My second favorite drug has always been great conversation! I have a couple of bars close to work I like, too. Never thought I’d be able to say that! Now I’m just waiting for my energy to return because this is creeping into it’s third week and I’m still so exhausted and struggling to sleep.
I’m so grateful to have the friends that I do and to have such great people at work, too. I may be broke, but at least I’m (mostly) happy! I still wish I had friends in the town I lived in or at least nearby. 25 miles in any direction and I got great people in my life, but where I live is kind of a dead zone. Not that I mind flying solo these days. Not one bit! Just, sometimes, it would be nice to have someone to go to coffee with or a movie or just chill out with some Mario Kart or Netflix, ya know? Ah well. Whatever will be, will be!
Gosh! So much going on! Tigress and I will have our FIFTH dance show performing together coming up in early July! I cannot even believe it, but it’s true! This will be the first year we’re both gainfully employed during rehearsals, too! Ha-ha! No idea what we’re going to do for song or costumes yet, but that always is the fun part! If you think you’ll be in the SF/Oakland area check us out! It’s a guaranteed great time!
Big Dance, Big Dreams
Saturday July 8th, 2017: doors at 6:30, show at 7:00pm
Sunday July 9th, 2017: doors at 1:30, show at 2:00pm
Laney College Theater900 Fallon St, Oakland, CA $15 advance/$20 door
Tickets available NOW at:http://ift.tt/2puTwLD
I don’t know what or when I’ll write again, but I wanted to let y’all know I’m alive at least! Maybe I’ll have some funny dating stories to share! Ha-ha! Who knows?! If I’ve learned anything it’s that life will always keep you on your toes! Never a dull moment! Ha! I’ve been thinking a lot about the early days of this blog and my activism and how long ago that all seems now. I feel like I’ve lived an entire lifetime since then. So who knows what tomorrow will bring for any of us. I hope you’re all well and loved and happy. But you know, hit me up! Let me know how you’re doing and what’s on your mind these days!

My blog’s Facebook page for things I share that aren’t on this blog (body positive always, funny sometimes):
http://on.fb.me/1A18fAS  Or get the same “shared” content on twitter: @NotBlueAtAll
I also have an Instagram, I rarely use it but would like to more…encourage me to?:
http://ift.tt/1NpWevR
And as always, feel free to drop me a line in comments here or write me an email, I love hearing from readers:
notblueatall@notblueatall.com
If you would like to support this blog, and it’s archives, via paypal, you may do so here: http://bit.ly/1P2cZgO

via I'm Not Blue at All http://ift.tt/2nWxcgB
Posted by Notes From The Fatosphere at 15:17