Doctor Kills Fat Person, Gets Slap On The Wrist 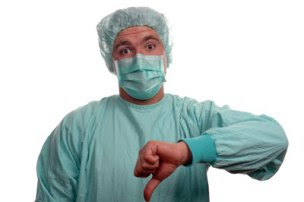 Reader Amy passed on the article “Weight loss clinic doctor suspended; Slimband Substandard care of gastric banding patients” which was sent to her news package at work, where she receives any and all health and mental health-related articles.  I thought I would translate it from sizeist bullshit to English.  The article’s actual text is indented and may be triggering for all the reasons you might think, you can skip those parts and still get the gist of the post.

As I’ve written about before, at best weight loss surgery is a crap shoot that might kill you. This clinic’s assembly line approach, and its medical director’s negligent views toward it, are perfect examples of that:

The medical director of Canada’s busiest private weight−loss surgery clinic has been suspended three months for substandard care of patients, including one who died in a Calgary hotel room a day and a half after his operation. Dr. Patrick Yau has said he conducted 6,000 gastric banding surgeries at the Slimband clinic in downtown Toronto whose colourful advertising was once widespread.

A doctor, who chose to advertise a dangerous surgery as if it were a hot new movie, was suspended for three months because he did a shitty job – including killing a patient.

His discipline related to two specific cases, including one where he gave weightloss surgery to a 61−year−old woman who had a normal BMI. Experts say such treatment, which can have complex physical and emotional side effects, should only be for the morbidly obese.

In the first case, the issue was that he gave a life-threatening surgery to a thin person, and people are only comfortable with fat people’s lives being put at risk in that way.

The other case involved a 38−year−old obese man from High Prairie, Alta., with type 1 diabetes, who was released a day after his operation without any testing of blood sugar. He flew back to Alberta that day and was found dead in a hotel room the next morning, the hearing heard. The Alberta coroner said he died from bacterial meningitis and complications of his diabetes. The College discipline committee chastised Yau for not having proper procedures in place before patients are discharged.

In the second case they were ok with the risking the patient’s life because he was fat, but the doctor didn’t bother to test the blood sugar after his operation despite the fact that the patient was a type 1 diabetic – maybe the doctor was late for his tee time, maybe he just didn’t care that much about a fat patient, maybe he’s just wildly incompetent. Regardless, this led to the patient’s tragic death.

He pleaded “no contest” to charges of failing to meet standards of the profession, and in exchange the College withdrew a charge of incompetence. It was not his first run−in with the regulator. The hearing heard he had been cautioned − a lower form of censure − three times before for similar issues. And he was twice ordered to undergo remedial education, including having a personal “coach” in 2015.

Even though he killed someone, and he had a history of incompetence (with three prior censures for “similar issues,” twice being required to undergo remedial education courses, and being required to have a personal “coach,”) they let him take him plea that he failed to “meet the standards of the profession” and withdrew the incompetence charge.  I mean, the person he killed was fat so it barely counts, right? In three months he can be back to putting fat people’s lives at risk, but not thin people since we consider it criminal to give thin people a surgery that is recommended for fat people – even if they have the exact same actual health issues.

With extensive advertising on TV and the Internet, Slimband was the most visible of private clinics across the country that offer weight−loss surgery, and described itself the busiest. Yau said he has performed over 6,000 gastric−band surgeries, more than any other physician in the country, usually with “excellent results.”

The doctor claims that in his assembly-line style practice he has performed over 6,000 surgeries usually with “excellent results” – except when he kills the patient or does something that requires censure and remedial education of course.

A 2012 National Post report, however, quoted malpractice lawsuits and former Slimband employees who raised questions about whether patients who signed on following a persistent sales effort were adequately screened, sufficiently warned about possible complications or provided sufficient post−operative care.

Turns out that when the doctor said he usually had “excellent results” what he meant was that there are malpractice lawsuits and former employees who are concerned that in the company’s quest to profit off fatphobia, they failed to give patients true information about possible complications, or provide them with appropriate post-operative care.

The company said at the time that patients are fully informed of the risks and receive post−op service that is the best in the industry. It also cited customer surveys that showed the vast majority of patients were satisfied.

The company says that things are fine, because the “vast majority” of clients who filled out a survey said that they were satisfied.  Of course, the patients they killed would be less likely to fill out the survey, so…

Though its website is still live, Slimband closed on March 22, said Elisabeth Widner, the College’s prosecuting lawyer. She did not explain reasons for the shutdown.

In the only bit of good news, the clinic is now shut down and no longer mutilating fat people for profit.

Sick of a sizeist world?  Get tools to fight back  – register for the Fat Activism Conference
Click here to register

via Dances With Fat http://ift.tt/2oq5S6x
Posted by Notes From The Fatosphere at 06:46