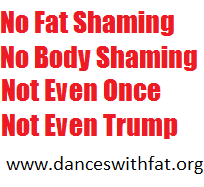 I was so disappointed to hear that Rosie O’Donnell joined in on fat-shaming donald on Twitter. It’s really not ok no matter what he weighs or how much weight he has or hasn’t gained. The real problem is that the thread she Tweeted out to her 1.09 million followers is a cesspool of size bigotry – including the constant no-less-wrong-just-because-it’s-so-predicable conflation of weight and health.

In looking at the thread that she links to (which is not linked to here because I’ll not give it clicks) I’m extra disappointed to find that so many of the people who are gleefully engaging in fat-shaming have Twitter pages that are absolutely full of social justice posts. The idea that fat is the last acceptable prejudice is total bullshit – there is way too much prejudice and it’s all far too acceptable, what this does remind me of, is that people who are vocally anti-racist, anti-homophobia, anti-transphobia, anti-misogyny, anti-ableism and more are often still absolutely comfortable engaging in and supporting fat-shaming (Melissa Toler wrote an incredible piece about this here.)

There are those who will claim that it’s ok because donald regularly fat-shames people, or because he is an absolutely despicable racist, xenophobic, islamophobic, homophobic, transphobic, fatphobic, ableist, misogynist sexual predator who installed white supremacists into the highest levels of our government while constantly trying to give less to people who already get crumbs while he and his cronies steal every cookie from the jar.

Those people are wrong.  There is more than enough material to criticize donald from now until the end of days without taking cheap shots at his size. In fact, his body might be the only thing about him that isn’t a problem – there is absolutely nothing wrong with donald’s body.  Besides which, answering his bigotry with size bigotry is super screwed up.

Speaking of donald’s bigotry, when he fat-shamed Rosie in the past, she was justifiably furious (and, happily, a lot of people backed her up,) so why go after donald’s weight and, in the process, add to the notion that there’s something wrong with fat bodies?

The thing is, it really isn’t about donald at all. It’s about us. With our speech, our actions (and our Tweets)  we are always either helping to dismantle fatphobia or we are adding to it.  Let’s choose to solve the problem rather than become it.

Over the course of eighteen self-paced, content-packed, quick videos you’ll get the tools you need to create healthy relationships with food, movement, and your body, and you’ll map out a path to health that makes sense for you, in an easily digestible format. Built-in tools allow you to track your progress and keep notes individually or as a group.
Click here for all the details and to register!

via Dances With Fat http://ift.tt/2AtCqCw
Posted by Notes From The Fatosphere at 00:01