Finding my Truth and Owning my Feels Through Vulnerability 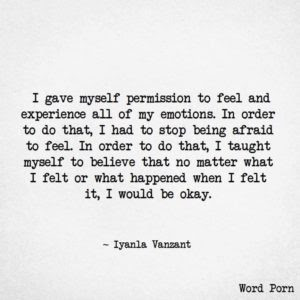 I struggled for a very long time to acknowledge my feelings, to feel them, to sit with them, about anything. I would make jokes, “Feelings?! Blerg! Nope!” or make barfing sounds (because my inner child will never die!), but I didn’t recognize this repulsion as fear. I think that is what it was all along. A fear of feeling anything that I couldn’t control or would remind me of darker times I’d survived. It was so much easier to tamp those feels down and pretend all was right in the world.  It’s sad to say, but I even used the whole positive thinking tropes as a way to ignore any emotion that didn’t feel in line with that. I suppose it was my own weird way of coping with what I wasn’t yet ready to process.

Our brains are there to help us, support us, to get us through what we don’t think possible. When we dream, even if we have nightmares, it is our brain’s way of defragging or cleaning up the bits that life leaves in the grey wrinkles within. It doesn’t mean anything, necessarily, but if it helps you to gain perspective it can be meaningful to examine. Our brains can protect us from that which we aren’t currently able to face, such as trauma. I recall being so stressed out beyond measure that I actually didn’t feel stressed at all. I’m certain that this was my brain’s way of ensuring my/its survival. It wasn’t until I left that job, this was a long time ago, that the weight of that stress was fully felt. At such times we insist internally/externally that we don’t have time for this shit. Or that feelings, stress, processing is for the weak. Ha-ha! I can assure you that the opposite is in fact true. 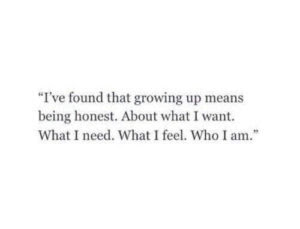 “I’ve found that growing up means being honest. About what I am. What I need. What I feel. Who I am.”

I spent years in a relationship longing for my desires to be fulfilled, but completely unable to express them. That was a quick and sure path to misery. In my marriage we both, I think, followed this pattern. Not speaking meant not confronting what was obviously wrong in the relationship. This was a pattern in the long-term relationship that followed my marriage as well, though I did my best to be upfront and straightforward, insisting to do better this time, but the other person turned a blind eye at every turn. Avoidance of feelings does not erase them, it only prolongs what you must at some point eventually face and deal with. In the end, you won’t be the only one suffering. I tried to push the issue, head on as is my way now, but they resisted so hard that eventually they would just acknowledge the issue and promise to do better, ad nauseum. Nothing ever improved until we were both living the lie that was our relationship for four years. Ugh!

The struggles of that relationship affected my friendships. People I loved and trusted and cared for deeply gave me full and encouraging permission to compromise my own principles. It made me distrust the world to the point where I didn’t talk about anything personal at all. It is very likely what kept my writer’s block in place for so long, too (what a miraculous relief it is to be writing again). Some of those friendships had to be severed when the pressure to sidestep what they saw as an unreasonable if not inauthentic relationship became toxic. I was quite clear in expressing my boundaries, but folks who ignore or push your boundaries are not people you actually want in your life, I promise. I isolated myself out of a necessity to be myself. It was a tough time, but soon I had new people in my life who I shared those truths and boundaries with who accepted me and loved me for them, not in spite of those boundaries and principles.

Compromising yourself for the sake of others rarely turns out well for either party. You’re essentially living a lie and forcing someone else to, too. Whether either knows or acknowledges this is not the point, you will be miserable, but maybe not immediately. I spent twelve years like this and didn’t understand why or how we could both be miserable. When you hold back so much of yourself when you stop sharing and becoming your true self and seeking that in the world and your own journey, you live for someone else and it is a lie. To be honest is to be vulnerable. Vulnerability is a scary thing, but it is a powerful and necessary thing. I pushed vulnerability away for so long in fear of being rejected, even in my own marriage. I found truth and honesty in leaving to become what I needed to be, whatever that meant or turned out to be in the end. I’m now finally feeling the fruits of that labor, and still seeking and becoming what that is. 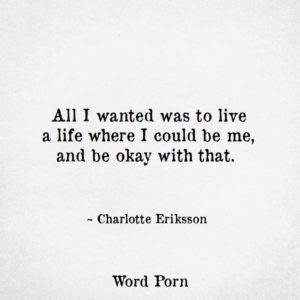 “All I wanted was to live a life where I could be me, and be okay with that.” Charlotte Eriksson

Something that has helped me along the way was the suggestion by a then-coworker to read the book “Daring Greatly” by Brene Brown. Brene Brown has one of the most watched TED Talks of all time and it’s all about vulnerability. Daring Greatly came after this, but it pushed me to find a way to own my vulnerability and to find power in it. It showed me ways that these things can come up in our lives where we would typically run from or avoid those feelings. Having someone to talk through these things while also reading that book helped immensely. It makes me incredibly sad that that same former coworker went through that with me only to then turn their back on it and me entirely. C’est la vie!

I have had many other people reach out to me to tell me that by being so open, transparent, and ultimately vulnerable in an often public way, has helped guide them to find their own light and truths from within themselves. Nothing has ever moved and inspired me like that. That is what reignited my voice and my writing here. I am so grateful to have this platform to share my stories, to give voice and names to the things we all struggle with. It helps me just as much if not more than it has helped others. I know I am living my most authentic life, being my truest self, and “riding my own melt” when I am helping and supporting others. It may not make sense to everyone, but to the ones that it does strike a chord with, it is golden. Thank you so much for that. 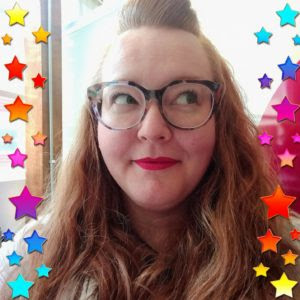 via I'm Not Blue at All http://ift.tt/2BHCbVt
Posted by Notes From The Fatosphere at 04:12