I think I’m finally owning my goth-ness. I never really felt cool enough to be a goth. I’ve only been going to goth clubs since 1996! Ha-ha! I’m ridiculous! More and more though I keep coming back to fashions, accessories, music and more that all harkens back to those 90’s glory days at the “So What” at the Maritime Hall in SF. I discovered so much about myself there and so much fantastic music and fashions and just a safe space for weirdos of all sorts. I found my people, so to speak, but I certainly didn’t know it at the time. I was too awkward and extremely insecure, like in every possible way. At first I went, very reluctantly, with a group of friends. I didn’t even know what goth meant or was and just didn’t really care either. I think they bribed me in some way that first time, but not twenty minutes after walking through the door of the So What, I fell for the whole scene!

That first night they had a live band playing already as we entered the dance floor area. After two songs I walked right up to the merch table and bought their cassette (it was 1996!). The band was 16 Volt, whom I later met and hung out with at a different club in San Jose (RIP Cactus Club), but the album was Letdown Crush. All these years later and I still love that band and their music. You may have heard their stuff in various video games over the years, industrial. Anyway, it was kind of love at first listen. When the band was done with their set and the DJ started to spin I had no idea what was in store. Just the best music ever! I found out that I lean new wave/romantic, but enjoy some stompy industrial stuff, too. The Cure & Depeche Mode being my personal mainstays.

I didn’t know how to dress for this type of club. I basically just wore some kind of random lingerie top over a black bra and black jeans. Picture also my red glitter, L7 (all-women Punk Band), chain wallet, and as many chain and cross necklaces as I could get my hands on. Oh! And my beloved 1460 Doc Martens, obviously! I don’t think I did a damned thing with my hair because I never did back then. Makeup was just tons of black eyeliner and blood red lipstick outlined in black. No blush, no eyeshadow, no foundation…just my natural redheaded palor and youthful glow! I did not wear glasses then. I later wore a sub/dog collar with the loop in the middle.

This club was just so special and I had no idea. Once a month they would have a masquerade ball with a theme and a live bondage show. I learned so much there! Even if I was too shy/scared/etc to incorporate these things into my life then. I’m good with all of that now. Ha-ha! (Fat AF is my fat sex podcast with my bff!) I have so many good memories of that place. I eventually started going on my own. At age 19/20 I rarely did such things but felt badass and brazen going to the So What solo. I really thought all goth clubs would be the same, but little did I know that I would spend the next two decades trying to find that same vibe elsewhere. *Sigh*

Now I mostly stick to one or two clubs that lean more 80’s New Wave than anything else. Lately it’s been strictly Club Satori at The Ritz in Downtown San Jose and Stragelove or whatever other New Wave type of night they have at the Cat Club on Folsom in San Francisco.  I’ve never been to Bondage A Go-Go or Death Guild, though they are legendary, but have heard some of those DJ’s spin at other clubs. I’ve been to some woman-run goth nights, including the only BBW Goth Club in the U.S. Club Bodice at the White Horse in Oakland, and The Hanging Garden at The Uptown in Oakland. I’ll stick with my old ass stuff, to be honest. I don’t feel the warmth, respect, and general weirdo vibes at those last two that I do at others. It’s more younger peeps, acting cooler than cool, most people don’t even dance! Such a tragedy. And maybe I’m too fucking old for this new goth stuff. That’s possible!

My favorite of faves is at Club Satori when they do The Cure night once a year.  They do play other music, but there is such a hefty and healthy dose of songs by The Cure mixed in that I dance all night every time and it’s like my happy place! I think it was February 2017’s The Cure night when I peeped a hottie on the dance floor and told my bestie that I wanted to bite this humans luscious arms. This is not something I’d ever done or had the urge to do, mind you, and very much out of my character I can assure you. But soon it became a bet. Okay, my bff bet me a quarter just to see if I’d do it and so I could say it was for a bet. I was sweaty and slightly buzzing from the hard cider they have on tap (Nice!), so popped into the restroom to refresh and touch up my hot pink lipstick. When I came out and was walking up the ramp I saw this hottie getting ready to leave. I locked eyes with my bestie and determinedly headed for said hottie.

I asked them if I could bite their arm. They said, “Wait, mine or anyone’s?” and I said, “Oh no, just yours!” and gave that sorta sexy, sorta demanding, sorta flirty, because you know you wanna, look at them. They had already put on their leather motorcycle jacket and said, “So, through the leather?” and I just shook my head slowly and said, “No.” And so they walked over to a nearby stool, took off their jacket, hoodie, and placed their helmet on top. They held out the top of their forearm and said, “Not too hard, right?” and I just smiled, grabbed their arm and pulled them closer so I could get a big juicy bite of their bicep. After I smile and laughed, they laughed and hugged me. I thanked them and girlishly ran over to my bestie to giggle like children about the whole thing. Then said hottie came over to us after getting their gear back on and asked if they should get a rabies shot. When we looked confused they responded, “Sorry, I’m a vet, bad joke. You’re fine. Have a good night. Ha-ha!” If I wasn’t wearing tights that night I swear my panties would have hit the floor! Ha-ha! That night is legendary in my social circle and I love how so not-me this bit of fun was. I keep an eye our for that special veterinarian every time I go to that club, but especially on The Cure night. Never have seen them again though.

I have lots of goth club stories and memories, but I’ll instead show you some recent goth night looks, sadly outfit pics are impossible in my tiny house, so you’ll have to use your imagination…dream me up something fancy! Ha-ha! 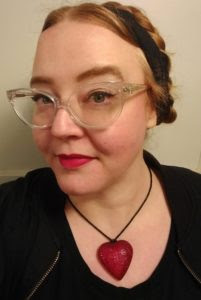 I wore this to Club Radio in Oakland for a goth night that kinda sucked but I met some cool people, Dre especially,
who smoked me out and bought me a bottle of water when I ran out of cash.
My hair was two braids pinned on top, that I wrapped a length of lace around for fanciness. Ha! 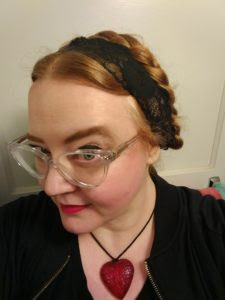 This was from The Cure night in San Jose this past February, the Friday night before I started my new job. 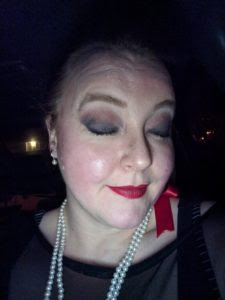 I had also done something fancy with my hair that night. Gotta love YouTube tutorials! 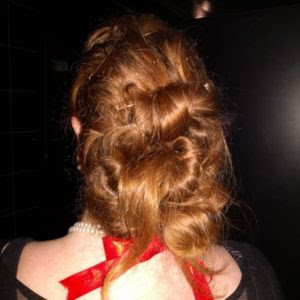 I’m wearing the Boleyn dress from Chubby Cartwheels, and get tons of compliments each time I do! 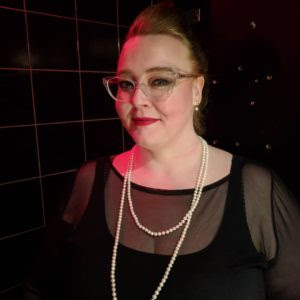 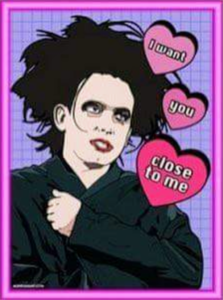 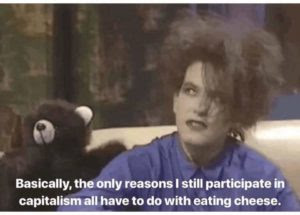 These are from last week, just a workday, nothing special, but more goth than I usually go for. I love it!
At my desk, dorkin’ it up! 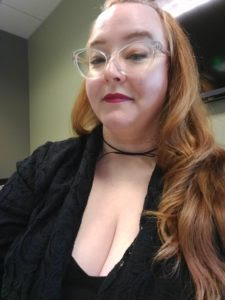 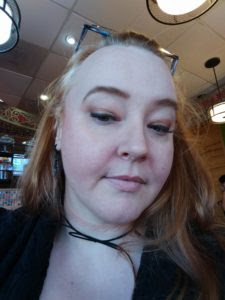 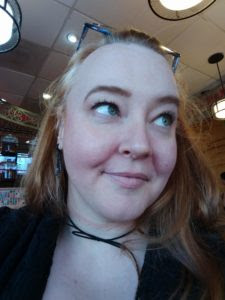 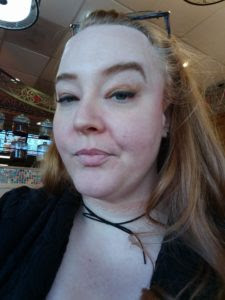 Still in love with my Zenni Optical heart-shaped sunglasses! C’mon! 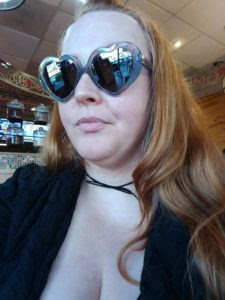 The following are from last Friday night which was Depeche Mode night and I did a fun thing with my hair! 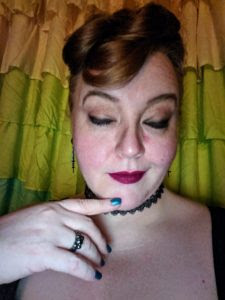 I also recently gave chokers another shot (since the 90’s) with a 5 pack of ’em from Torrid. 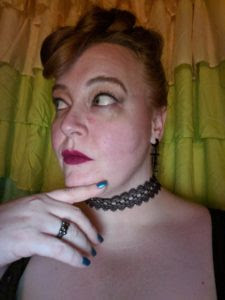 The ring is a black stone with skulls and it’s my favorite amazon purchase, it was like $8. 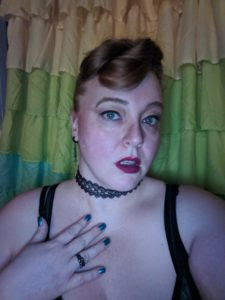 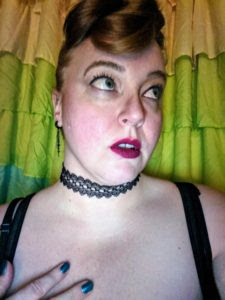 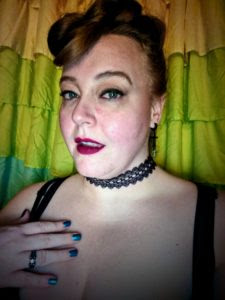 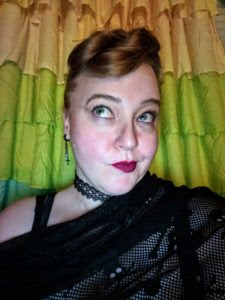 The wrap is literally just a yard of mesh halloween fabric from Joanne’s with skulls on it, but I dig it. 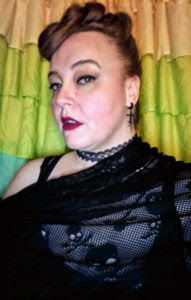 No filters, no fucks to give, no need for anyone’s validation.
I’m a fucking forty-year-old goth, dammit! 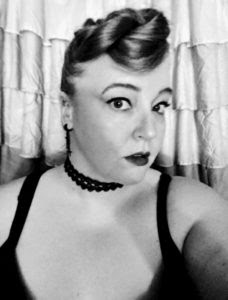 I also have an Instagram, though I need to get back into posting there: https://ift.tt/1NpWevR

via I'm Not Blue at All https://ift.tt/2MJv8UZ
Posted by Notes From The Fatosphere at 05:19