This whole concept of being “oversensitive” really sticks in my craw! The people who have called me”oversensitive” have all been outright assholes! The same people who demonize political correctness. The same people are also racist, misogynistic, homophobic, and more. Truly. I have never in my life heard a calm, rational, critical thinker call someone “oversensitive”. And yeah I’m using quotes, I know it’s a real word, but I disagree entirely with it’s existence, let alone usage. Isn’t this just a way to police our behavior instead of theirs?!

Political correctness is often demonized, ridiculed, and tied into “oversensitivity”. The thing is, the people who feel this way simply do not want to a.) be uncomfortable for any reason at all ever, b.) have anyone tell them they are wrong for any reason at all ever, c.) are resistant as fuck to change anything about themselves outside of the superficial. So their response when faced with someone saying something they said or did is wrong/inappropriate/hateful/racist/sexist/hurtful/damaging is to lash out by saying the problem is ours alone. Yes, ours, most often but not always women, am I right?! UGH! 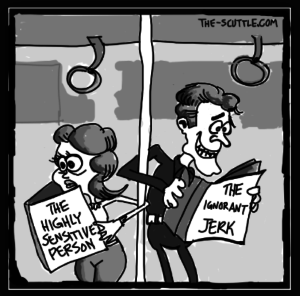 I know, I know, # NotAllMen…FUCK THAT! #ALL(cis)MEN! I think many may use the term “oversensitive” as a way of trying to calm the other person or minimize the situation, they may even have good intentions. The thing is, intent doesn’t mean shit, impact does! Every man that has ever told a woman to smile may have had the best of intentions. Perhaps they envision a world of smiling faces staring back at them (the horror!), but that is not up to them, the impact of their remarks are demeaning at best.

I do understand that we’re socialized differently. As children we are raised to act a certain way around others. If you’re a girl, this means using manners, playing hostess to any guests in your home, considering others feelings before our own, sometimes even not speaking unless spoken to, always there to help and serve others. Boys may be raised with some of the same, but expressing emotion/pain is definitely not one of them. This is treated as weakness or even offensive. Imagine, then, when faced with someone telling them something they said or did was wrong/hurtful/oppressive, that they cannot even compute this! “I just said something I’ve heard others say and not get shit for it!”

Many people (of any gender) are not always or even often aware of the impact of their words and behavior. I work with some interesting characters, lemme tell ya! Ha-ha! Seriously though, a colleague today mentioned how quiet it was now that someone had moved their desk to the other side of the office. I replied, “And they’re on vacation this week!” and they said, “Oh that must be it! Ha-ha!” because this person is well known for being loud and basically obnoxious (IMO Toxic AF!). They have very private phone calls very loudly while walking around the office, completely disrupting everyone else. Ugh! This person knows these things about themselves, they think it’s cute or makes them look more like a leader somehow (barf – as if), they simply do not care enough to change. That is the key!

You see, it’s never “just words”. Words have meaning, this is how we communicate, it’s called language. Words can hurt, cause harm, effect others even if they aren’t present, they can change how someone feels about you or others. We use our words to get our point across. When you call me “oversensitive” you’re telling me way the hell more about you than you’ll ever even get the chance to know about me!

I don’t believe that anyone is “oversensitive”. I’m an empath, I’m hella fucking sensitive, but to me there is no “over” part. If you’ve been called “oversensitive” take it as a compliment for not being a callous jackass! A friend recently posted about being called this and I wanted to shake them and hug them and tell them, “NO! You are not “oversensitive”! You are a finely tuned instrument of love!” It’s a skill, a sixth sense, if you will. It’s a wavelength not all get to tap into. Cherish that shit! I do. 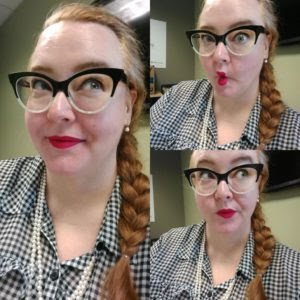 I also have an Instagram, though I need to get back into posting there: https://ift.tt/1NpWevR

via I'm Not Blue at All https://ift.tt/2w9sTRg
Posted by Notes From The Fatosphere at 05:09