Women Are Dying From This: Taking Cesareans Seriously 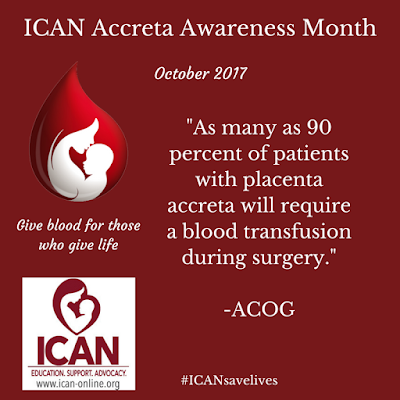 When women have cesareans, they are rarely warned that a possible complication can be placental problems in future pregnancies.

Many women (and especially higher weight women) are pressured into cesareans in their first pregnancy. Many of these same women are counseled away from Vaginal Birth After Cesarean (VBAC) and into repeat cesareans in subsequent pregnancies.

Few of these women have been told that cesareans raise the risk for Placenta Accreta, a very serious complication, and that every cesarean increases the risk for it. I know *I* wasn't told this. This is a tremendous disservice to parents and to the importance of informed consent.

In Placenta Accreta, the fertilized egg implants near or on scar tissue in the uterus. This scar tissue is usually from a prior cesarean, but can also be from a D&C procedure, fibroid removals, a perforation from an IUD, or any uterine surgery or instrumentation. The placenta then grows into the uterine wall in this scar tissue. After the baby is born (often prematurely), the placenta can't separate properly and bleeding can become prolific. If the bleeding is not resolved, the mother can die. 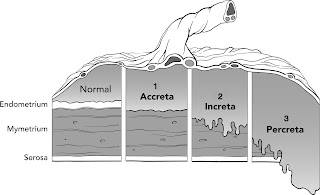 When the placenta invades the muscles of the uterus, that's known as Placenta Increta.

When the placenta grows through the uterine wall and into nearby organs like the bladder, that's called Placenta Percreta. All are extremely serious conditions, but percreta is the most serious of all.

You can read more about this in my blog series on Placenta Accreta.
The absolute numerical risk of accreta occurring in any one person is low, even with prior cesareans. Most women who have had cesareans will not experience an accreta. However, it is such a life-threatening condition that even a relatively small incidence carries a tremendous burden of complications, cost, and potential loss of life.
The more cesareans you have had, the greater the risk for accreta. In one very large study (Silver 2006), accreta was present in:

This is why it is important to avoid automatic repeat cesareans and to keep VBAC a viable choice. Multiple repeat cesareans are the single most preventable factor for accretas.
Accreta does sometimes occur after only one cesarean, like the woman in the video below, and that's why it's important to prevent a first cesarean whenever possible as well.

This mother had only had ONE prior cesarean, but still developed accreta with baby #2. Her first cesarean was a planned cesarean, urged by her OB. She was never warned that her cesarean meant accreta was a potential risk for the future.

If we want to decrease maternal mortality rates and prevent complications from accreta, we MUST decrease cesarean rates. As the mother in the video below states:


A cesarean can be a life-saving intervention. The goal is not to eliminate cesareans. The goal is to make decisions regarding cesareans appropriately, and to recognize that even an uncomplicated cesarean and recovery can still put the mother at significant future risk....


"There are too many cesareans now, 1 in 3 births, and researchers estimate that as many as 50% of those are unnecessary.

And since a prior cesarean is a significant risk factor for developing a future accreta, that means that there are women developing accreta when it could have been prevented. So the easiest way to reduce the amount of accretas is to reduce cesarean levels...

via The Well-Rounded Mama https://ift.tt/2NxWiKX
Posted by Notes From The Fatosphere at 20:43