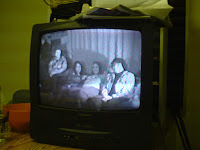 In 2010 I had a very startling moment. I was visiting the GLBT Historical Society archives in San Francisco, looking at Judy Freespirit's papers. I was researching my doctorate, a version of which has been published as a book. I can't remember if I had met Judy at this point, or was yet to meet her.

I found a lot of interesting stuff in her boxes. If I've said it once, I'll say it a thousand times more: fat activists, please make plans to archive your stuff, our stories are fragile and in danger of becoming lost.

The startling moment was the discovery of a VHS cassette with the words Fat Underground on its spine. No other information. No information in the content of the tape about who made it and when, either. A mystery tape. 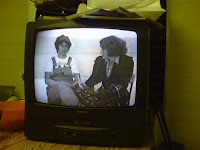 The facilities for screening VHS tapes at the GLBT Historical Society at that time were basic to say the least. I sat in a windowless cupboard-cum-kitchen, piled with detritus and watched the tape on an old monitor.

Suddenly here I was, seeing the Fat Underground spell out their manifesto, producing skits, talking directly to camera. The video looked old, blurry and washed out. I was excited that the FU used technology in this way, perhaps in the mid to late 1970s. It was great to see them sitting together in some kind of underground room, looking like a group of revolutionaries. Lynn Mabel-Lois, now Lynn McAfee, made my hair stand on end with her address to the viewer: she grabs her fat arm and says "I feel like a freak and I'm getting PROUD!"

I was too dumbfounded to ask the archivists about the tape, if I could make a copy, what the deal was in terms of taking stills, anything like that. I just sat and watched it, and made notes with my pencil in my notebook. I also took some terrible photos of the screen with my phone because I couldn't believe what I was watching and I wanted proof later on that I had seen what I had seen. 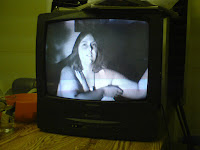 Up until this point I had never seen pictures of the Fat Underground, let alone moving images. In many ways this group is mythical to me, even though I know people who were involved. They existed to me through obscure documents and a kind of echo chamber of rumour, hearsay, half-remembered detail and so on. They were a foundational moment in fat feminist activism, but always somewhat removed. Because of the mythology surrounding the group, sometimes I wonder if I'm making things up. In the face of obesity discourse, fat people are usually positioned as unreliable narrators (the opposite is more likely to be true, of course, obesity discourse is a gaslighter par excellence). But here was evidence: they are real!

I suspect other copies of this tape exist in other archives. I would encourage fat activists with better access than me to investigate making this recording public, or developing it further. It is an amazingly rich resource.

via Obesity Timebomb http://ift.tt/29VPyYR
Posted by Notes From The Fatosphere at 06:01