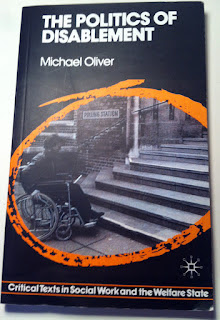 In her excellent book, Fat Rights, Anna Kirkland lays out a number of arguments that fat people and their representatives might use to fight discrimination in a US court of law. She draws on anti-discrimination theories that emerged from anti-racist and anti-sexist legal work, and disability law in particular. I first came across the Social Model of Disability in the early 1990s through the work of Mike Oliver, but I am including it here because it has been around for some time and has important overlaps with these earlier attempts to shift the focus around discrimination.

What do I mean by a Social Model? It is an alternative to the belief that the individual should be held responsible for the discrimination directed against them. This belief is directed at fat people in this way:

Fatty: I am discriminated against because I am fat.
Society: You should just lose weight and then you'll be fine.
Fatty: It is almost impossible to lose weight and keep it off forever and it will damage my health and wellbeing if I try and do that. Here's a load of stats and proof.
Society: Too bad! You'll just have to keep trying. Plus it makes quite a lot of money for us and gives us people to scapegoat. Hurrah!


With a Social Model the burden of responsibility for dealing with discrimination is shifted towards society in general:


It is my belief that a Social Model is crucial to fat activists. Operating under the assumption that social attitudes are the problem, and not the individual, enables fat activists to identify those places where discrimination surfaces and do something about it. It is much harder to get organised if we are to believe that discrimination is our own fault. Perhaps this is one reason why weight loss proponents and anti-obesity people continue to promote the idea that weight loss is the only way forward, they want to keep us in our place, invested in a losing game, to stop us from becoming disruptive.

I wrote primarily about the Social Model of Disability and fat identity in my first book, Fat and Proud and I say a bit more about it in my recent book. But although others have built on that work, it's quite rare to find the Social Model spelled out in the archive and in fat activist communities. I think this is because it is most associated with disability activism and reflects the infuriating divisions between fat and disability activists, which are only now being eroded. But it remains an important ways of thinking about fat activism, it is an activist-based theory that has foundations in anti-racism and anti-sexism. It is a key tool for the liberation of all people, in my humble opinion. I'm perplexed why it isn't invoked more often and would encourage readers to find out more about it.


via Obesity Timebomb http://ift.tt/2agwwwO
Posted by Notes From The Fatosphere at 06:03