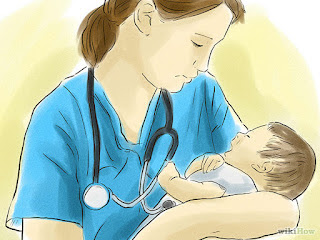 This lack of choice is greatly frustrating to the many VBAC women who want to be attended by a midwife. They feel they have a better chance at vaginal birth with a care provider that specializes in more hands-off model of care. Furthermore, they feel that a prior cesarean should not deprive a woman of her autonomy in choosing how and with whom she gives birth.

Here is recent research from a hospital that implemented a midwifery-led model of care. It compared stats from before and from after the switch to see how the change affected things.

The most striking result was that changing to a midwifery-led model of care increased both the number of women who planned VBACs and the number who actually ended up having a VBAC.

Most importantly, safety outcomes were just as good.

This shows that midwives can safely attend VBACs. Midwifery care is likely a key step in lowering the cesarean rate by preventing automatic repeat cesareans and by improving VBAC rates in those who do labor.

It is time for hospitals to stop restricting women who have had previous cesareans from accessing midwifery care.


BACKGROUND: Research is yet to identify effective and safe interventions to increase the vaginal birth after cesarean (VBAC) rate. This research aimed to compare intended and actual VBAC rates before and after implementation of midwife-led antenatal care for women with one previous cesarean birth and no other risk factors in a large, tertiary maternity hospital in England. METHODS: This was a retrospective, comparative cohort study. Data were collected from the medical records of women with one previous lower segment cesarean delivery and no other obstetric, medical, or psychological complications who gave birth at the hospital before (2008) and after (2011) the implementation of midwife-led antenatal care. Chi-squared analysis was used to calculate the odds ratio, and logistic regression to account for confounders. RESULTS: Intended and actual VBAC rates were higher in 2011 compared with 2008: 90 percent vs. 77 percent, adjusted odds ratio (aOR) 2.69 (1.48-4.87); and 61 percent vs. 47 percent, aOR 1.79 (1.17-2.75), respectively. Mean rates of unscheduled antenatal care sought via the delivery suite and inpatient admissions were lower in 2011 than 2008. Postnatal maternal and neonatal safety outcomes were similar between the two groups, except mean postnatal length of stay, which was shorter in 2011 compared with 2008 (2.67 vs. 3.15 days). CONCLUSIONS: Implementation of midwife-led antenatal care for women with one previous cesarean offers a safe and effective alternative to traditional obstetrician-led antenatal care, and is associated with increased rates of intended and actual VBAC.

via The Well-Rounded Mama http://ift.tt/2ciuklI
Posted by Notes From The Fatosphere at 14:33