Yesterday, September 18th, I had the privilege of being Tigress’ guest for The Curvy Girl Lingerie Show in Campbell, California. I had the same privilege last year, but this year felt different. This year I wasn’t too nervous or too awkward. I mean, I fully appreciate and enjoy my own special brand of quirky-awkward-endearing. I work with what I got, ya know? No shame in that. But last year I was a bit lost, I think, and most uncertain of myself, for whatever reasons. This time was different because there was more time provided for the models to mix and mingle before the show and I was in the best company around!

I was thinking a bit about what I might wear a few days before, but hadn’t really decided on anything. In fact I was worried I’d come up with nothing very interesting or exciting at all. I was almost resigned to this fact when I remembered that I’d ordered this lovely mint tutu from Society+ during their last flash sale (plus a ten dollar coupon I had found, too)! Without actually trying it at all, I soon started to put together the outfit in my head the night before. Uncertain of colors matching or how hot or cool the weather might be, I sort of forgot about it as I fell asleep Saturday night.

The next morning I fell into a frenzy of productivity, though I haven’t a clue how that happened! Ha-ha! I threw a load of laundry in the washer and headed to Peet’s and Trader Joe’s for my twice monthly grocery shopping trip.  Ohmigosh! TJ’s was full of assholes! Straight up! I found myself doing all I could to resist the pressing urge to actually growl at people, they were that rude! In the end I felt compelled to do something to cleanse my soul. After a frustrating experience taking several attempts to load my paltry three grocery bags into the backseat of my car, I was returning my cart to the corral when I saw an older lady nearly done emptying hers. When she grabbed her last item I snagged up her cart, connected it with mine, and pushed them both into the corral. She was so sweet and expressed her thanks profusely! When I explained how I needed to do something for myself to feel better and took the soonest opportunity with her cart she exclaimed at length my kindness and wished me so well I nearly forgot about how I was treated in that store. We parted with my wishing her, “A fantastic Sunday!” which seems odd to me now but neither of us questioned it. Ha!

I headed back home to finish my laundry and get ready for the Lingerie show! Only, I ended up giving my puggyman a much needed and overdue bath, too, but he hated it. Ha! He’s always good, but I could tell he really wasn’t happy about it at all. After his bath we played a lot and he wore himself out with his silliness. Worked out well since it gave me some needed calm to get ready. Once I decided what I wanted to wear I tried it on to make sure it worked and whoa it did! Better than I could have hoped! This outfit was everything! I had half thought to save the skirt for my birthday but what’s the point in saving things for only special occasions??! Psshht! So I did  my hair, put my outfit together and then did my nails. I went fairly neutral in colors for my nails since my outfit was very colorful.

When I left the house I noticed people stopping and staring at me as I walked towards my car. Thinking little of it I had no idea what would be in store for me the rest of that day. Everywhere I went it seemed this outfit produced a strong reaction! The venue for the show was in downtown Campbell. A quaint area of affluent folks and charming storefronts. I found a parking spot nearby in the shade and was happy for it once I got out of my car and realize what a hot day it was. As I entered the venue and shown my ticket I was immediately accosted, in the best possible way, due to my outfit. This tutu from Society+ was the real winner of the day! I felt like a celebrity! Everywhere I went folks wanted their picture taken with me. It was a bit overwhelming but in such a positive sort of way!

I ran into old friends and made a couple of new ones. It was such a blast! Not that I didn’t enjoy myself last year, but I think I didn’t want to be noticed at all last year and so that sort of colored my experience. But this time?! Whew! I could barely walk two steps without someone remarking on my outfit! And at one point, whilst chatting with Tigress and some friends at the bar, channel 7 news approached us and asked if any of us would care to be interviews. Well, Tigress fell right into it with the reporter and tried to bring me along but I chickened out! She was such a natural though! So full of grace and calmness and charm! It was really something to behold! Then it was show time and she had to dash off to get ready.

The show was fantastic as always! This year they featured 40 models, some professional, most were amateurs and some were outright celebrities in our big fat world. It was truly a success in every way! The food was fabulous (the cheese!) and I had remembered to bring cash for the bar this time and thoroughly enjoyed my two vodka-crans. The air conditioning was perfect and I didn’t sweat a bit! While seated I grew acquainted with a friend of Tigress’ who is also a model. Then two sweet ladies sat beside me and one confessed to following me on facebook. I always worry about acting strangely in such situations, but she and her friend were delightful and we chatted quite a bit before the show.

After the show I waited for Tigress to come out so we could take pictures and we did and I’m so glad! She is a great friend indeed and so good at taking photos and insisting upon selfies and such. I love that woman so much! I cannot even tell you!!! And so here ya go, the outfit of outfits! 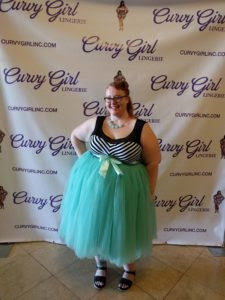 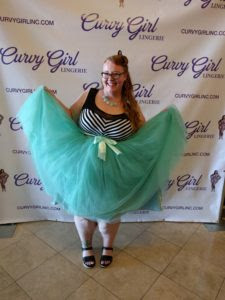 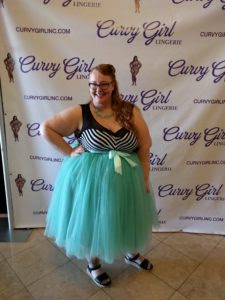 All of this was of course after one of the very busiest and craziest weeks I’ve had yet at my new job! I organized and put on a traditional Swedish crawfish party called Karftskiva! I had never experienced this particular festivity and it was definitely one of those everything that could go wrong did go wrong adventures, but in the end it was a success and we all had a blast! Note the deep blush of my cheeks after so many shots of aquavit! Whew! Whatta night!!! 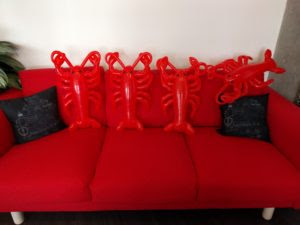 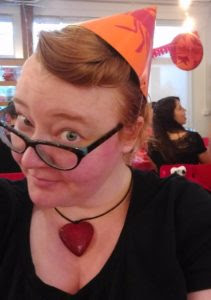 My job is so hard, y’all! Sometimes I have to snuggle very tiny puppies…it’s the worst!!! Ha-ha! 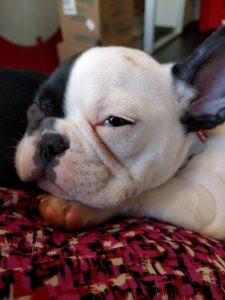 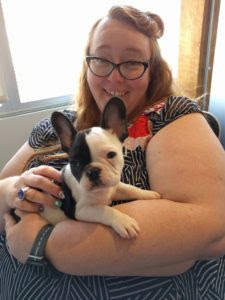 I’m feeling on top of the world, if not incredibly tired, too. I’m really quite happy, though. And reading a lot of Jane Austen. I think I’m on my seventh of her books at the moment. I’ve gotten the girls on my team to say things like, “Her countenance is most agreeable” and the like. Ha-ha!

Thank you so much for reading. Do consider submitting a guest post if you’re so inclined.

My blog’s Facebook page for things I share that aren’t on this blog (body positive always, funny sometimes):
http://on.fb.me/1A18fAS  Or get the same “shared” content on twitter: @NotBlueAtAll
I also have an Instagram, I rarely use it but would like to more…encourage me to?:
http://ift.tt/1NpWevR
And as always, feel free to drop me a line in comments here or write me an email, I love hearing from readers:
notblueatall@notblueatall.com
If you would like to give money to support this blog via paypal, you may do so here: http://bit.ly/1P2cZgO

via I'm Not Blue at All http://ift.tt/2degB2a
Posted by Notes From The Fatosphere at 10:50