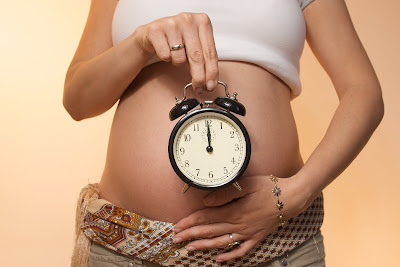 Many care providers push strongly for elective (planned) cesareans in older moms. However, a recent study challenges the wisdom of this common practice.

This extremely large study confirms that planned cesareans as a routine intervention for older moms is a bad idea. It increased their risk for infection, hysterectomy, kidney failure, cardiac arrest, and death.

This is an issue close to my heart as I was an "AMA" (Advanced Maternal Age, or 35 or older) mom for three of my four pregnancies.

In many practices, a woman like me ─ an older "morbidly obese" mother with a prior cesarean ─ would have faced intense pressure for a planned cesarean. I was fortunate to have care providers that didn't pressure me to have a cesarean just because of my age or weight. (Then again, I purposely chose providers who utilized a more low-intervention model.)

But the pressure for a planned cesarean can be quite strong on older mothers in many practices, especially if the mother is a first-time mom or received fertility treatment. One study found four times the rate of elective cesareans in older first-time moms. But why?

Some doctors see vaginal birth in an older mom as so risky that they prefer to just bypass labor altogether and plan a cesarean. Although the risk for stillbirth does seem to go up somewhat as women age, recent research confirms that this risk is quite modest (and not all research finds an increase in risk). Most healthy older women will do just fine.

Furthermore, a recent study confirms that the difference in outcomes between planned cesareans and planned vaginal births in older moms is quite small. Each choice has its own pros and cons to consider.

Risks probably increase as a woman ages; a woman of 54 probably has a much different risk than a woman of 41. However, many women with very advanced maternal ages have safe vaginal births too. Age alone should not be used as an absolute guide for a planned cesarean.

Although the risk for needing a cesarean during labor does increase as a woman gets older, the research shows that the majority of older women who are given a chance at having a vaginal birth actually do give birth normally. Giving birth under the care of midwives or in a non-obstetric unit setting may improve chances for a vaginal birth in older women who labor.

That is not to say that a planned cesarean is never appropriate in an older mom, only that the decision should be a nuanced one. Risks are higher in those with multiples, with those who have their first pregnancies after 40, and in those who required fertility treatments. Older women who have serious pre-existing health conditions, who have multiple major risk factors, or whose babies do not seem to be growing well have a much different risk profile than an older woman who is healthy, has no pregnancy complications, and has a healthy baby who is growing well.

It would be nice to see further research that provided concrete quantification of absolute risks at various ages in combination with various risk factors. That would be more helpful in guiding decision-making.

Still, all the factors must be considered and birth decisions should be made by the woman and her providers together. The decision should never be imposed on a woman by her provider; age does not negate a woman's right to personal autonomy in her medical decisions.

The bottom line is that routine use of a planned cesarean in older women simply because of age puts that mother's health at risk. Better to have the mother go into labor and see how labor goes. A cesarean can be done in labor if needed, but this very large study shows that routine cesareans for age leads to greater harm overall.

As the authors of the study conclude:


Planned cesarean section is a key factor significantly influencing maternal morbidity and mortality in healthy women with advanced maternal age. When possible, planned cesarean deliveries should be avoided in this population.

For an excellent review of the overall research around pregnancy in ages 35 and older, please see this article.

via The Well-Rounded Mama http://ift.tt/2d2bG1C
Posted by Notes From The Fatosphere at 17:34