A nail salon is accused of trying to charge people more for a pedicure based on their weight: 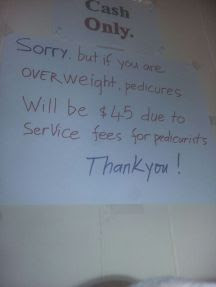 Sign reads: “Sorry. but if you are overweight, pedicures will be $45 due to service fees for pedicurists Thank you!”

It’s the exclamation point after “Thank you” that really activates my throat punch reflex.

Now, I say that they are “accused” because even though Deshania Ferguson was at Rose Nails in the Frayser Plaza Shopping Center in Memphis, Tennessee and took the picture, and even though background in pictures of the sign perfectly match the floors, walls, and chairs in the salon, the owner swears that the sign wasn’t put up at his shop and he says that “There are the same walls and floors everywhere, it could be anywhere.”  He did say that he had thought about it because fat people are difficult for the nail techs and he had two $2,500 chairs break.  But, he definitely didn’t put up the sign.  Right, sure,  so let’s just deal with this hypothetically.

A salon that did this wouldn’t be the first, in fact I’ve blogged about this before, but let’s go through it again. As the 300-ish pound recipient of many a pedicure, who has gotten pedicures with people heavier than I, neither I nor my friends have ever had a problem with techs or chairs, but I did some research just to be sure that mine was not an outlier experience.

According to several sources the average weight limit is 300lbs but that is a low number in the owner’s manual meant to decrease liability exposure for the chair manufacturer, and the chair will actually hold much more weight.  (There are some who claim that the chairs in the salon in question are more than 10 years old and that’s why they broke but, again, there’s no proof.)  But if, hypothetically, a salon was charging fat people $15 more for a pedicure for chair breakage, and the chairs are $2,500, then they betting the the chair will only break with every 166.6th customer over 300 pounds which doesn’t really make sense – either they think fatties will break the chair or not.  And if they are charging the fee to those under 300 pounds then that’s indefensible since the chairs were designed to accommodate them.

But wait, despite the owner bringing up broken chairs, the sign doesn’t say anything about the chairs – it just says that it’s for “service fees for pedicurists.”  Alright – the idea that fat people feet somehow warrant an extra $15 charge is bullshit, including and especially when the sign makes absolutely no designation of what they are defining as “overweight.” Do you have to go in and get eyeballed by an employee?  When you walk in do they tell you to pick a color and step on the scale? This is seriously screwed up.

Obviously, fat people who want to engage in activism (and avoid over-priced pedicures) will avoid  a salon that would do this.  But this is where the thin allies can shine. Maybe these places can survive without fat customers – but they can’t survive without any customers.  A big part of ally work is refusing to give our money to companies that don’t give other people the same experience that we get.  So I’d like to see my not-fat pedicure procuring friends head to salons that don’t charge a fat fee.

via Dances With Fat http://ift.tt/2mPYpwS
Posted by Notes From The Fatosphere at 04:14