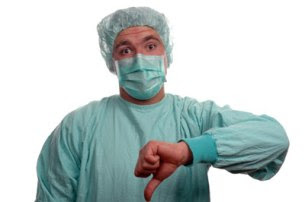 As Republicans in US government announce a health program that will provide less healthcare for lower income and older people, and enormous tax cuts for the very rich (including, specifically, health insurance companies) there is a lot of discussion about what will happen when healthcare gets even more difficult to obtain

When it comes to fat people, there can be even more barriers created by fatphobia.  The following is a real story from a blog reader, shared with permission, that beautifully illustrates many of the barriers that fatphobia creates to getting evidence-based, competent healthcare:

So I’ve been having a horribly bad asthma flare, for going on nearly six weeks now. I’m wheezy, to the point that people across a room from me can hear the rattle. I’m also full of phlegm, and for the entire first half of this, I wasn’t able to produce any of it. It’s been bad enough that I’ve been in the ER twice, and my O2 sats regularly hang out in the low 90s. The pain in my ribs, back, shoulders, and chest, from struggling to breathe, has been an almost constant companion.

My first trip to the ER earned me a round of prednisone, but my blood work and xrays showed no infection or pneumonia, so no antibiotic. I get uncomfortable symptoms when on high dosages of prednisone, so I altered the prescribed taper just a little and was on it nine days instead of six. I was feeling pretty good for a few days after the steroids, but got worse again, and ended back in the ER two weeks after the original visit, and the night before my appointment with my asshole of a primary.

In the ER the second time, xrays again showed no pneumonia. They couldn’t get my O2 sats to stay above 90, even after two breathing treatments and 40mg of prednisone, but since I was seeing the primary the following morning, and my pain levels had improved greatly with the breathing treatment, they let me go home.

Primary visit. This asshole has lectured me about my weight, both personally and through his nursing staff, since my first visit. He started in right away with weight. He’s convinced my weight has caused my issues…never mind that I’ve had asthma since childhood, or that I’ve been this same weight for three years. Never mind this is a sudden onset of intense symptoms. Never mind that he hasn’t addressed my concerns about better managing my asthma in general, say, with a prescription for the oral Singulair that’s worked well for me in the past, or even by making sure I’ve got rescue inhaler refills called into my pharmacy. (I’ve been making do with Urgent Care prescriptions, and by under-treating or using alternative/OTC treatments when I do have flare/attack symptoms)

Never mind that I live with a smoker, which triggers symptoms, or that I was unexpectedly exposed to triggering cold temps when I had to change a flat tire, just before the flare. Never mind that I’m almost every single year, this time of year, struggling with respiratory issues related to poor indoor air quality and/or illness. Or that the least time I had a flare this prolonged or this severe was while my hormones were dealing with puberty, and I’ve just begun the menopausal drift.

At least he finally agreed to prescribe me an at-home nebulizer and refilled (with just 3 refills for the year -cue eye roll) my rescue inhalers, right?

Referral for a lung function test & consult with a pulmonologist. Techs at the lung function were perplexed that the primary would assume weight was primary, with all the other things I reported. They agreed that, without a sudden significant gain, a lifelong asthma diagnosis want suddenly going to be triggered into a flare by a stable weight. I was having a pretty good breathing day that day. Their evaluation was that there was no COPD (which asshole primary had been sure would be the result), but that the results definitely indicated and supported my already well-documented history of asthma.

That was last Monday.

Thursday, I went to Urgent Care because of pain and fullness in my ears. Because of my O2 sats and audible rattling in my chest, the doctor there performed an exam based upon that, asking questions about duration of symptoms and medical history. She was unsatisfied with the care actions of the other doctors I’ve been seeing, and prescribed Doxycyclene to treat what she suspected is an underlying infection.

My smoker at home has been gone out of town for a little over a week. During that time, I’ve been using the nebulizer almost every four hours, and then added the antibiotic…I’ve been coughing up some massive amounts of chunky, gunky lung butter, folks. Major improvements, not only to background pain levels, but to chest rattle, energy levels, and overall O2 sats. (I’ve got a portable at-home monitor) I’d been seeing slow progress with just neb treatment & reduced second hand smoke, but every nebulizer treatment since beginning antibiotics triggers major coughing spells that bring up big chunks.

Today… I receive a call from asshole primary’s nurse. In a chipper, sing-song voice, she reports that the pulmonology results indicate my weight is the culprit and that primary doctor recommend reducing calories. I asked why then, after regular nebulizer albuterol treatment, reduced second-hand smoke intake, and powerful antibiotics, now I’m finally improving? And why only now, after three years of maintaining at this weight and an entire lifetime’s history of asthma…why now am I only just now having an asthma flare, because of my weight?

Fucking bullshit. I’m going to need some major restraint, and a whole lot of willpower to keep from going postal at the pulmonologist’s appointment Monday. This is straight up lazy, dangerous, bad medical practice.

In the US system of “healthcare” (which is based on the idea that it’s cool to let people die if they aren’t able to “sufficiently” contribute to the bottom-line of multiple for-profit companies – including CEOs who make more than $100,000 a day) it is very difficult for many people to get healthcare, with the worst situations happening to the most marginalized people.

Another layer to that for fat people is the practice of thin people who can get care receiving evidence-based interventions, and fat people getting diets no matter – as we see clearly in the situation above – what the evidence suggests (which is especially a problem since there is no reason to believe that the weight loss methods prescribed by doctors will lead to thinness or better health – which are two different things.)

If you find yourself in this situation, the first thing to know is that you are not the problem – the system and the doctors you are dealing with are. You have every right to be frustrated and angry – this is bullshit. Well-meaning people will give you advice that is at best completely useless and unhelpful and at worst will make the problem worse. However you choose to deal with this is valid.

Some suggestions for dealing with this crap can be found here.

You can also check out the Fat Friendly Health Professionals List – and if you know fat friendly health professionals anywhere in the world, please take a moment to add them to the list. These are stopgap measures that individuals may be able to use to help, but let’s also remember that the true solution is accessible healthcare for all, free from fatphobia.

via Dances With Fat http://ift.tt/2nezDGO
Posted by Notes From The Fatosphere at 07:58