The world is in a terrifying state, there’s no doubt about that.  With the USA imploding under the rule of The Great Orange Narcissist, fascism having gone mainstream globally, the UK opting for xenophobia and segregation from Europe, the mass Western rejection of our responsibility to assist people fleeing from harm and conservatives adopting The Handmaid’s Tale as some form of user manual, we live in very dark times.  There is no question about that. 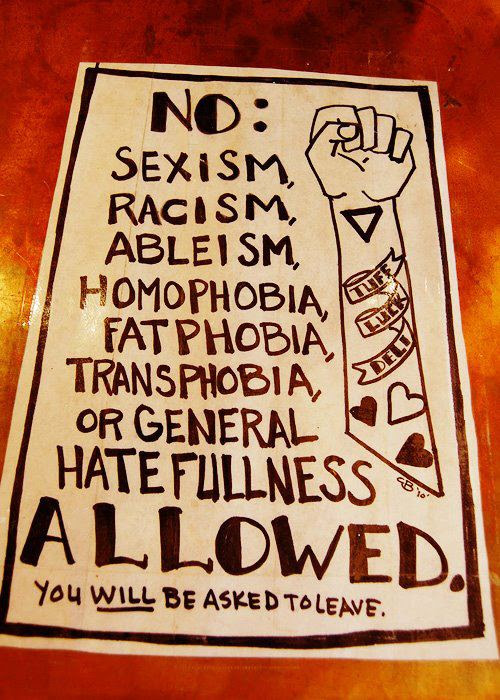 However, I have heard some quarters saying that to continue the fight for fat liberation is somehow frivolous or irrelevant in the face of all of the other issues that are happening in the world.  This to me sounds exactly the same as those who decried “identity politics” after the US presidential election, blaming those of us who spoke up for the oppression of marginalised communities for somehow “alienating” voters who got tired of hearing about people who were different to themselves.  Which is utter bullshit.

Those people who were privileged enough not to have to worry about their human rights were never interested in voting for anyone but themselves in the first place.  That is the core of privilege – the ability to ignore issues that do not affect you directly.

Now more than ever, the focus of righting all the wrongs that are in the world has to be on people – human beings.  The right of human beings to live their lives in peace and with respect, without discrimination and vilification for their skin colour, race, religion, gender, sexuality, health and physical abilities, income level and indeed, bodies.  This includes climate change as well – the right of all human beings to have clean water and food now and into the future, not just the elite.

Unfortunately, marginalised people have been banging on about the issues around xenophobia and discrimination, which boils mostly down to white supremacist patriarchy, for all of history.  More recently, women and other marginalised people have been warning about the rise of violence towards them from the same sector of society that are now in power across the globe, only to be told that we’re over-sensitive, or that we’re making a mountain out of a molehill.  Well the mountain is now visible to the rest of you, just like we said it would be.  The mountain has always been there – many have just refused to look up and see it right in front of them.

How does fat liberation fall into this?  Now more than ever, it is important to keep up the fight about body autonomy, the dehumanisation of some people because of their bodies, and the basic human rights of all people regardless of their body size, shape, ability or arbitrary measure of “health”.  When it is already difficult for fat people to get adequate health care, then the fight for health care rights must highlight those who are already excluded, and not just those who are at risk of being excluded later.  When fat people face discrimination and lower wages in the workplace, then rights for those who are already discriminated against need to be at the forefront of  worker’s rights.  When fat people are denied bodily autonomy – the pressure to punish and reduce their bodies, lack of access to effective contraception, the overwhelming push to force fat children into harmful diets and fat people in general into gastric mutilation against their will – then the fight for bodily autonomy must focus on those who are at the highest risk of losing that autonomy.

By this same token, that goes for ALL marginalised people – when we fight for the rights of human beings, then we must put those who are the most oppressed at the top of the list of the people we are fighting for – not shove them down at the end like an addendum, a last thought if there is anything left after the “more important” white, male, able-bodied, thin, heterosexual, Christian, affluent cisgender have got their share.  The privileged are already getting the lion’s share of everything, first dibs at things that we should be able to find resources for all humans, not just the privileged.

Not to mention that across almost many marginalised identities, people of colour, poor people, disabled people, trans people, women and so on are more likely to be fat, AND they’re more likely to be further marginalised within their own communities.  Ask almost any fat woman who belongs to any other minority how her identities intersect and how she is treated within her own communities in her fat body, and see just how important it is to her that her fatness is included in the fight for her freedom.  Marginalisation is intersectional – a person is never just marginalised for one aspect of their lives when they fall into multiple minority categories.

In these times where hatred, greed and xenophobia are getting stronger and stronger, now more than ever we need to stand up for our rights as human beings, and for the rights of those who do not have access to the privileges that we access.

via Fat Heffalump http://ift.tt/2nGiKpy
Posted by Notes From The Fatosphere at 21:16