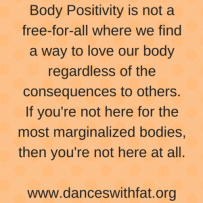 Recently singer/songwriter Pink was widely praised for positing a picture to Instagram that many people and publications have been calling “body positive” :

The picture is Pink in the gym, posing for a full body selfie in black and pink workout clothes including leggings, a tank top, sneakers and a cap, and the caption reads:

“Would you believe I’m 160 pounds and 5’3”? By ‘regular standards’ that makes me obese. I know I’m not at my goal or anywhere near it after Baby 2 but dammit I don’t feel obese. The only thing I’m feeling is myself. Stay off that scale ladies!  #feelingmyself #strongismygoal #bodygoals @msjeanettejenkins#happysaturday #getitin #GIJaneismyWCW 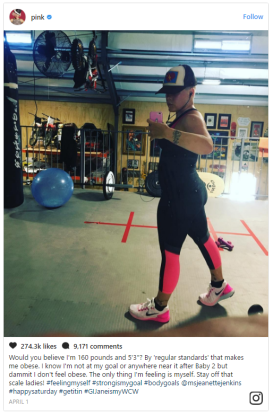 While she’s certainly had some missteps I’ve been a fan of Pink, her music, and her message for a while. I think she’s done some very cool things in terms of body image. But as a woman who actually is “obese” or, as I prefer to call it, fat as hell, I’m here to say that this is not one of them.  I don’t think that she intentionally set out to fat shame, but that’s what she did.

Not for nothing, but her math is wrong.  At 5’3 and 160 pounds she is in the “overweight” and not the “obese” BMI category. Of course, BMI is complete bullshit so that’s the least of the problems with this. The main issue is that what Pink is doing (and, unfortunately, being praised for) is trying to perform “body positivity” by fat bashing.

In terms of things that people say that add to the widespread marginalization and oppression of fat people, “Dammit I don’t feel obese” is right up there with:

Nobody is obligated to love their body, but everyone should have the option, without any kind of hoops to jump through.  There are no health, behavior, ability, or size requirement for loving/appreciating/respecting our bodies. There is also no such thing as “feeling obese.” It doesn’t make any more sense to say that I “feel fat” than to say that I “feel brunette.” They aren’t states of mind, they are simply things that I am.  In suggesting that one can “feel obese” – in the context of it being a bad thing – Pink is stereotyping fat people and setting up being fat as the opposite of feeling good about ourselves which, in a fatphobic culture such as this, too often becomes a prophecy fulfilled by oppression.

I absolutely agree with her about staying off the scale, but the idea that we should stay off the scale lest we find out that we are “obese” is clearly fat-shaming, and not even in same zip code as “body positive.”  Finally, any use of the terms “obese” and any “overweight” offensively pathologizes bodies of a certain height/weight ratio.  I prefer to reclaim the term fat. I’m fat, I’m not “over-weight,” just like I’m short, I’m not “under-tall.” If fat doesn’t suit you, there are plenty of other neutral terms to use: people of size, larger bodied, heavier people etc.

Body Positivity grew from the Fat Activism movement, and while I understand why people of all sizes would want to engage in a culture that affirms and respects their bodies, that doesn’t make it ok to co-opt a movement and then exclude, even oppress, those who founded it. Body Positivity must center and champion the bodies that are the most marginalized in society, otherwise it becomes just another tool of oppression. Unfortunately, in addition to its tendency to exclude fat people, Body Positivity has inherited many of the issues that Fat Activism had and still has including not doing nearly enough to combat white supremacy and ableism, and that must be addressed and fixed by both movements.

Being Body Positive isn’t just how you feel about your body, it’s about how you feel about all bodies – and how you express that.  It’s about creating a world that respects and affirms people of all sizes – and in particular those whose bodies are the most oppressed in our current culture.

While people are allowed to do whatever they want with their bodies, Body Positivity requires sacrifice when it comes to how we talk about it. We can’t be Body Positive and still participate in diet and anti-fat language and culture, even though participating confers privilege and opting out invites ridicule. That means that if our body size changes – regardless of the reason – we talk about that in terms that do not disparage other bodies, including bodies that are the size (or larger than the size) we are/were.  It requires that we think about how we talk about our personal choices, and whether what we are saying oppresses or marginalizes other bodies, and we make choices accordingly.

Body Positivity requires that when people tell us that our “body positivity” is hurting them, we listen, care, and make changes, rather than acting like we know more about their oppression than they do, or that our personal body positivity is worth creating body negativity for others.

Body Positivity is not a free-for-all where we find a way to love our body regardless of the consequences to others. It’s a movement that demands that we create a world where everyone has the opportunity to love their body. It’s learning about and avoiding ableist, sizeist, healthist, racist, classist, transphobic and queerphobic language and acting, speaking, and writing accordingly.  If you’re not here for the most marginalized bodies, then you’re not here at all.

Get the tools to practice intersectional Body Positivity – Register for the Fat Activism Conference
Click here to register!

via Dances With Fat http://ift.tt/2pHzSye
Posted by Notes From The Fatosphere at 05:16