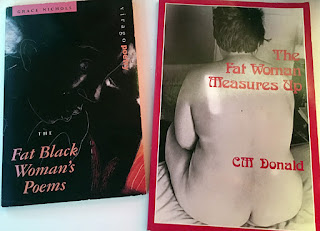 Two collections of poetry stand out for me as classic fat feminist texts of the 1980s. These are The Fat Black Woman's Poems by Grace Nichols and The Fat Woman Measures Up by CM Donald. The former appeared in 1884 and had a good number of reprints, the latter in 1986. I wonder if both books went on to influence a collective of US fat poets who produced an anthology in 2009, referenced below.

My preference of the two volumes has tended to be towards CM Donald's work. The pieces are angry, vulnerable, piss-taking, spiky, and I like that a lot. I identify with the speaker where they are written in the first person. I understand that this is likely because she is a white dyke like me.

When I first read The Fat Black Woman's Poems I was put off by an earlier cover to that pictured here, and what to me then looked like a cutesy rendering of fat black embodiment. One stanza, often quoted when people referenced the collection, reinforced this view of black women's fatness:


Contrast this with CM Donald's work:


To those women
Who find me cuddly
Who like fat women
And want to hug them all;


The fat black woman of Grace Nichols' poems is powerful, irreverent and sassy and I couldn't see through the strong black woman stereotype to enjoy the poetry at that time. I felt that the figure of a fat black woman who is larger than life let everyone off the hook about fatphobia, racism and sexism. I wondered if this was about the poets' respective standpoints in relation to fat, were they fat? Did this affect what they wrote? I still don't know.

But revisiting them both now, my feelings have changed. I still adore CM Donald's work and often wonder what happened to her. I have grown to appreciate The Fat Black Woman's Poems for the richness of their imagery, their sexuality, their rendering of fat black women who are so often made invisible in fat activism. Perhaps back in the day they were reduced to a stereotype because many white readers like me could not understand the world that the poet was describing. When I return to them now, I see that they are subtle pieces and that politics, death, survival, rebirth, nature and resistance are also very present. They are the work of a wonderful poet.

via Obesity Timebomb http://ift.tt/2sfIEFA
Posted by Notes From The Fatosphere at 08:39