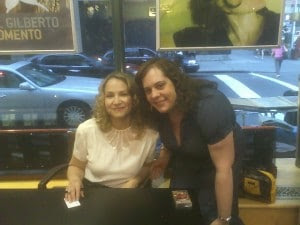 Back in 2007, I went to a now-defunct Barnes & Noble to meet one of my favorite artists and songwriters of all time, Joan Osborne. Her music had meant so much to me for so many years, and I was so excited to get to meet her.

I remember that moment really vividly, both because I got to meet someone I idolized and because it was one of those moments that made me reevaluate my endless quest for thinness.

Those if you who have seen my TEDx talk may remember me talking about “diet shakes that gave me the shakes” and back in 2007 I was using those as a dinner substitute when weight watchers stopped working for me. They were recommended by a fitness instructor I was working with to help get my weight loss “back on track.” I can’t remember if they did anything for me other than make me feel horrible, shaky, and sweaty. It was likely low blood sugar but I don’t actually know.

I waited in line for what seems like ages to meet Joan. I had had my dinner shake back at the office and as I waited I felt woozy and agitated. I tried to think of what I would say to pretty much my favorite artist of all time, whose songs had meant so much to me for so many years and whose singing voice I always seemed to emulate.

Finally I get to meet her and I felt like I sounded incoherent. I said something to her about her being a goddess, which sounded great in my mind but was mildly weird when actually said aloud. She signed my CD and I quickly asked the guy in line behind me to snap this picture.

I felt dejected as I walked down to the subway. My interaction with Joan was weird, and I was hungry but knew that when I got home I “couldn’t” have dinner. In my mind, the two were connected. Like, if I could have just had a normal meal that day I would have felt less all over the place and could have had a reasonable interaction with this person whose music meant so much to me. This wasn’t the nail in the coffin on my dieting life, but perhaps it was the moment when I considered buying the coffin in the first place.

via Body Love Wellness http://ift.tt/2rzzNtP
Posted by Notes From The Fatosphere at 06:27