The Biggest Loser – Ding Dong the Witch is Dead! 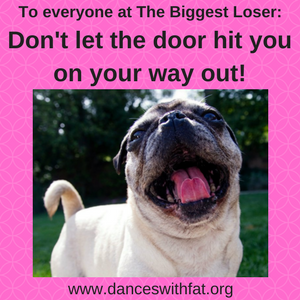 Reports are coming in saying that The Biggest Loser is cancelled. That’s excellent news and I could not be happier. Let’s recap this crap:

The Biggest Loser was a horror of a television show in which fat people were physically and mentally abused as they tried to lose as much weight as possible, as fast as possible, regardless of the danger, for a chance to win a tiny fraction of the amount of money that the show made off their abuse.

I am thoroughly convinced that if this show was shot with dogs rather than fat people it would have been pulled off the air after the first episode, because people wouldn’t have stood for this kind of mistreatment of dogs. The fact that fat people would subject themselves to this show is not a justification for the many abuses the show perpetrated.

Now the show finds itself under a cloud of suspicion as former “competitors” talk about the abuses that they suffered at the hands of their “trainers” and the show’s doctor, Robert Huizenga.

Click here to read the full piece, including how the show hurt not only their contestants, but also their viewers.

Want to create a world where The Biggest Loser would never get on the air in the first place?

via Dances With Fat http://ift.tt/2uv06Xg
Posted by Notes From The Fatosphere at 06:37