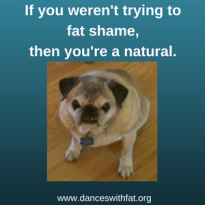 One of the great joys of writing this blog has been the people who leave comments here.  It makes me happy beyond words that the comment section of this blog is full of great insights, advice, support, and conversation.  It means that people who come here can break the cardinal rule of being fat on the internet which is, of course, never read the comments. Recently a massively fatphobic Facebook post generated another comment section that helped restore my faith in humanity. But to tell the whole story, we have to back up a bit…

A “journalist” (who, admittedly, may have been looking more for attention than a great teacher for her kid) recently wrote a piece called “Why I refuse to let my daughter be taught by a fat teacher.” In her own words, the nursery assistant who would be working at the well-rated school with her toddler was “a lovely woman, kind and great with children.”

Unfortunately, this journalist’s stereotypes about fat people got in the way, and she decided to move her child to a different facility. Let’s be clear about what happened — this woman chose a school based solely on how the teachers looked.

She feels that this is acceptable because the teachers look fat and she thinks it should be ok to discriminate against fat people. As if any bigot doesn’t think that their bigotry is justified. Like so many bigots, she tries hard to paint herself as the victim:

“This is the first time I have publicly admitted to feeling this way. Aware that the reaction would be anger and vilification, I censored myself. I told everyone I preferred the other nursery because it was smaller and friendlier. I knew I would be accused of discrimination, or ‘fat-shaming’, if I admitted the truth.”

She’s wrong though, nobody is accusing her of discrimination or fat-shaming — since it’s not an accusation at all, but rather a statement of fact.

This is the textbook definition of discrimination and fat shaming. It’s awful for the teachers involved (apparently there was *gasp* more than one fat teacher at the nursery), though they also probably dodged a bullet avoiding having to deal with this woman. Mostly I feel badly for her child who is growing up with a proud bigot for a mother, and for any fat friends her child will make (if she’s allowed to be friends with fat kids at all.)

If you think this situation can’t get any more screwed up, Garry Robinson of Kaizen Outdoor Fitness would like you to please hold his beer while he uses his Facebook presence to double down on encouraging fat shaming/

Click here to read the rest of the piece!

Want to create a world where this kind of fat shaming is considered wrong by everyone? Join us for the Fat Activism Conference!