That Questionable “Fit and Fat” Study 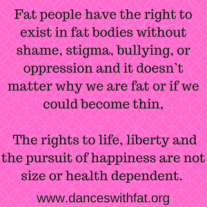 A blog reader asked me to take a look at this study.  It’s another one of those studies that headlines claim prove that you can’t be fat and “fit” (we’ve been here before and it was crap then as well.)  Let’s talk about this:

First, they are making an extremely basic correlation vs causation mistake – the fact that two things happen at the same time does indicate that one causes the other.  (Short example – they are suggesting that if people with fatter bodies have higher rates of cardiac incidents than thinner people, then making fat people look like thin people will give them the same health outcomes. That’s not good science. For comparison: men with male pattern baldness have higher rates of cardiac incidents than men without male pattern baldness.  Imagine if, upon finding out that information, researchers did as these researchers have done and suggested that in order to reduce the cardiac incidents, we need those bald men to grow hair – then the government started a “war on baldness,” studies calculated the cost of “baldness” on society etc. In this case while there is a correlation, there is no causation – both the baldness and the cardiac incidents are caused by a third factor, but if researchers had treated baldness like they treat body size we wouldn’t know that.)

They don’t control for the negative health effects of dieting and/or weight cycling (aka yo-yo dieting) which the larger bodied participants can be much more likely to have engaged in. Let’s not forget that in a diet culture, whenever anyone studies the effects of having a larger body, they are also studying the effects of dieting since that’s what is encouraged for fat people in our culture.

They don’t control for the negative health effects of living in a society where larger people are shamed, stigmatized, bullied, and oppressed in a number of ways including a lack of evidence based healthcare (because of systemic fat bias as well as doctor’s individual bias and the tendency to prescribe diets to fat people when they would have given a thin patient an evidence-based intervention), being hired less and paid less than thin people and, as Peter Muennig from Columbia found in his research, just living in a society where one is stigmatized is correlated with many of the same health issues that this study used to judge “unhealthiness.”

One of the quotes in the article my reader sent says that “information on physical activity, smoking, diet and social status could be adjusted for.” Looking at the study while they claim to have “adjusted the data” it does not appear that they actually had this information from the study participants. This is important because studies that do include behaviors (including Wei et. al; Matheson et. al; and The Cooper Institute Longitudinal Studies) have found that behaviors are a much better predictor of long term health than is body size, so studies that don’t include participant’s actual behaviors aren’t really relevant and are either poorly designed, or specifically designed to get exactly the results that this study did. (For an exhaustive list of evidence around this, check this out.)

The conclusion that if fat people are in more danger of cardiac incidents then it’s “not ok to be fat” or that one should attempt weight loss is problematic on a number of levels. First, they are acting as if body size is something that we can control, but provide absolutely no evidence for that. (Hint: it’s because there is none. The research shows that the most common outcome of weight loss attempts is weight gain, and there isn’t a single study where more than a tiny fraction of people achieve long term weight loss and even among those the weight loss is often just a few pounds.)

Again, saying that if fat people have more cardiac incidents than thin people then we should try to make them thin, is like suggesting that if men have more cardiac incidents than women we should recommend that they go through sex reassignment surgery (note that this is not be the same thing as correctly recommending gender confirmation surgery that a trans person might choose.)

People are at higher risk for health incidents based on everything from genetics, to race, to height and more, so suggesting that we try to make some people look like other people to make them healthier is seriously questionable. (Speaking of race, I think we should stop funding studies that under sample and/or ignore People of Color.  For far too long studies like this have been allowed to act as if white people are the only people worthy of study, and that’s bullshit.)

I also noticed that many of the doctors quoted in this article and others seem absolutely giddy that fat people might diet sooner. I think that this is part of a (fatphobic) process by which scientists, healthcare professionals, and public health professionals are shirking their responsibilities to tackle the difficult things that would actually improve health – access to non-biased physical and mental healthcare for everyone, a good wage for everyone, enough vacation and down time for everyone, a world without oppression and more (these are often referred to as Social Determinants of Health.) Instead, these “professionals” shift the conversation to suggest that the “problem” is that fat people exist, and then they claim that fat people could be thin if we wanted, so they conclude that all the world needs to be healthier is just a little more fat-shaming and weight loss culture, which isn’t just lazy, it’s dangerous and wrong. We have to start calling them on this behavior.

More important than any statistical analysis is that health is a complicated, multifaced concept. Health is not an obligation, a barometer of worthiness, entirely within our control, or guaranteed under any circumstances. Nobody owes anybody else “health” or “healthy behaviors” by any definition. Fat people have the right to exist in fat bodies without shame, stigma, bullying, or oppression and it doesn’t matter why we are fat, what being fat “means” for our health, if we could become thin, or if doing so would make us “healthier” by some definitions. The right to life, liberty, and the pursuit of happiness are not size (or health) dependent.

The conclusions being drawn here (that if fat people have higher rates of cardiac incidents then fat people should be eradicated – yes, eradicated is the right word) are sizeist and healthist and add to the stigma that negatively effects fat people’s health, includingthe suggestion of dangerous so-called “weight loss interventions” that include things like drugs, stomach amputation surgeries, and balloon swallowing, that end up killing fat people. So the most important takeaway needs to be that, regardless of what any study finds, it’s ok to be fat no matter what.

Want to create a world where researchers don’t call for the eradication of fat people? Join us for the Fat Activism Conference!

via Dances With Fat http://ift.tt/2wLTuCQ
Posted by Notes From The Fatosphere at 08:26