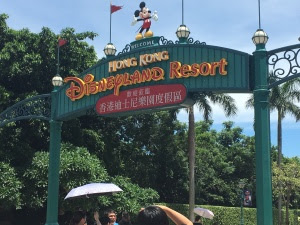 California is in my blood. My mother is a fourth generation San Franciscian. My Dad grew up in Southern California, before moving to the Bay Area as a teenager. After the oil business moved them to Midland, Texas, my parents continued to take trips back to their home state; it was the preferred vacation spot of the Pauséfamily. By the time I left for University, I had been to very few places in Texas, but was comfortable anywhere along the Pacific Coast Highway.

Trips to Disneyland were part of the fabric of my childhood. They were used as special occasions, family outings, and bribes to get me to demonstrate appropriate classroom behaviour (ie: talk less). Disney movies were one of the few approved media in our home; I grew up on a diet of Princesses and Fred McMurray musicals. As a kid, I strongly identified with the fat witch in Cinderella; as a teen, I was drawn to the fat sea witch of Ursula. As an adult, I recognise how problematic Disney is, with the patriarchal white supremacist ideologies and capitalistic goals. But I still sing along every time.

In my first year of University, I convinced some friends that going to DisneyWorld for Spring Break was the greatest idea ever. We had a friend who was a cast member, who offered his place and comped tickets, and we had a great week. When friends from that same University got married in Santa Monica a decade later, I chose to take a day trip to Disneyland while the rest of the wedding party shopped Rodeo Drive. Disney is a part of me.

When I was planning a stopover in Hong Kong (in my long haul travel from New Zealand to Germany), I discovered there was a Disneyland Park. At first, I thought it was a silly use of a day in a part of the world I’ve never experienced. But I did have four days, and Hong Kong isn’t that large of a city. I had another reservation, though. The last time I went to the happiest place on earth was during my final war with my body. I was a great deal smaller than I am now, and yet I remember the anxiety over whether I’d fit into the rides.

So you can imagine my anxiety this time around; 100lbs more awesome. How would that impact my experience? Will I fit into any of the rides? What else is there to do at Disney if I can’t? Can superfats do amusement parks?

Before I left, I had decided that even if I couldn’t ride any of the rides, I could still find joy in the magic of Disneyland. So, on my penultimate day, I hopped on the metro and headed to the park. 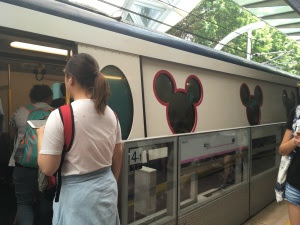 When I arrived at Disneyland Hong Kong, it was over 100 degrees (F) and 85% humidity. Not exactly weather to walk around all day in, regardless of the size of your body, your propensity to sweat, and whether any parts of your body rub together as you move. Luckily, I had lathered my folds up with Desitin, put on extra deodorant, covered myself in sunscreen, and was wearing a skirt and tank top – both optimal for superhot weather. After the first hour or so, I bought a visor to help keep the sun off my face. 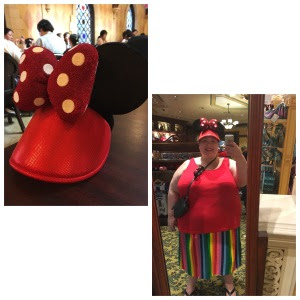 I knew from the start that I wanted to begin with it’s a small world. It’s the iconic Disney ride that exists in ALL the parks. I headed straight there once I arrived (Thanks Disneyland train that took me from the front entrance to FantasyWorld at the back of the park!). There weren’t lines for the ride, which was good (no waiting) and bad (no time to stealthily assess if I could go on the ride or not). I paid close attention as I weaved through the roped lines towards the ride and as I got closer I was able to confirm what I’d hoped: no bars across the hips on IaSW. (I could be wrong, but I’d imagine that bars across the hips are what makes many rides (at any amusement park) un-rideable for super fats like me).

So, I climbed in the boat (took a hoist up using the railing; it looked like they had a way for people without that ability to get in as well) and took a seat with a row to myself (like I said, no lines). 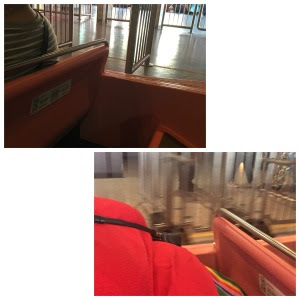 The boat; me and my belly & hips in the boat

The ride was just as awesome & annoying as I remembered. Apparently I was obsessed with this song when I was younger and led my godfather (& beloved uncle) to confiscate my Disney tape on a California road trip because all I wanted to listen to was this song. I found the representations amusing (THAT’s NZ?!) and perplexing (why does the continent of Africa not appear to be zoned into countries like the rest of the continents? Oh, right. White supremacy. Duh.) 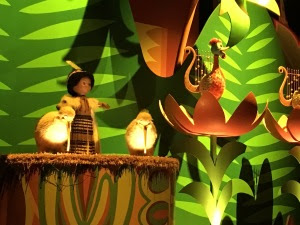 Overall, though, I was overjoyed that I could still actually partake in this experience. That my body didn’t make it off limits; that their ride didn’t prohibit me from enjoying the songs and sights of the world according to Disney. I rode the damn thing a second time to just soak it all in again. (After that, I headed to get my visor – because that sun was brutal and my face needed some extra protection).

Then, I rode the carousel. This was the only attraction I attempted where the turnstile to enter the area was narrow – I couldn’t have gotten through it. (This was also true at the entrance to the park, but there, they have a wheelchair/stroller entrance right next to each turnstile, so it’s an easy diversion). The attendant, at my non-verbal gesture to my hips and sad shaking of my head, let me out the side gate and directed me to another side gate that would let me enter the area. Pretty easy. No big deal. 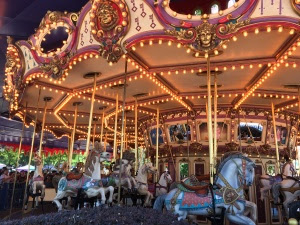 I found myself retreating to the indoor shows throughout the day. I’d never been to one before, with the exception of the Tiki room, as I’d always focused on riding as many rides as possible. But the heat & humidity made the shows attractive choices, and I didn’t have that driving need for rides. I went to Mickey’s PhilharMagic and Mickey and the Wonderous Book. Both were much more enjoyable than expected, and the air conditioned dark room was a welcome respite. In the short (12 min) PhilharMagic I was in an individual wooden theater seat that bit into my sides, as those usually do. But Wonderous Book (45 min) was in a theatre of bench seating, which was great. Both shows had the speaking in Cantonese and the singing in English. 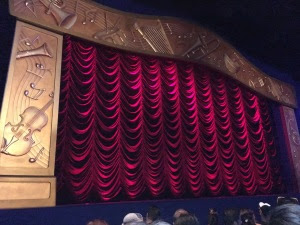 The other attraction I did was the Jungle Book River Cruise. Again, one I knew to be free from hip bars. Like IaSW, you have to step down into the boat (& then back up out of it), but this boat has a rail you can use to assist yourself if needed. Benches line the river cruise, and apart from an initial perilous dip when I first sat down (as the first person on the boat), my size wasn’t an issue. It was an enjoyable (if predictable) experience. 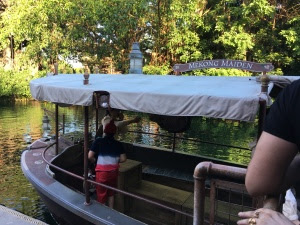 As you can see, I only attempted one ride at the park – it’s a small world. I wasn’t sure before I entered the park if I would try multiple kinds of rides, but it wasn’t long before the heat and humidity zapped all my resilience and desire to attempt to see if I could fit elsewhere. I was surprised, though, at how much fun I had engaging with the park in different ways. All my previous times at Disney, I’ve only ever done the rides. Rides, rides, and more rides. In a way, I’m grateful that my fear and the weather drove me to discover other parts of Disney. Maybe on my next trip, I’ll give a few other rides a chance. 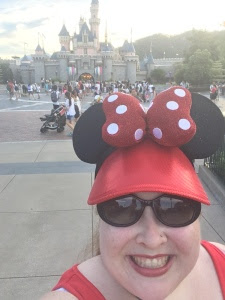 Regardless, I hope this post reassures other super fats that Disney is accessible to you – that bodies of all sizes can enjoy the happiest place on Earth! If you’ve got your own super fat at Disney experience, I’d love to hear about it – use #SuperFatDisney on social media or send me an email, friendofmarilyn@aol.com

via Friend of Marilyn http://ift.tt/2yuLG9B
Posted by Notes From The Fatosphere at 10:22