Staples vs. Sutures During Cesareans in High BMI Women 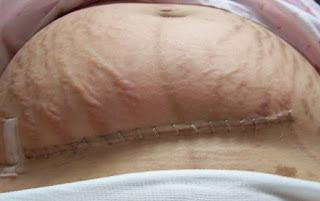 Women of size have higher rates of cesareans in many studies. Many of them are probably preventable but the fact remains that high-BMI women have a high rate of cesareans.

One of the problems with this is that "obese" women are at increased risk for infection and wound complications after a cesarean, and this leads to a great deal of morbidity and healthcare costs.

What can be done to improve outcomes? Past research has strongly suggested that closing the subcutaneous fat layer and avoiding a surgical drain reduces the rates of infection in high-BMI women. Higher doses of antibiotics also seem to be helpful, though the best dosage is still being debated. Using low transverse incisions instead of vertical incisions whenever possible probably also lowers the risk for complications.

Now, new studies seem to suggest that taking the time to suture the wound closed may result in less infection than using staples to close the wound.

Doctors don't always like to do this because suturing takes longer. And suturing a woman with a lot of abdominal fat is more challenging as well. So most often, staples are used to close a cesarean, especially in women of size. But is this a good idea?

Mackeen 2015 performed a meta-analysis of studies and found that using sutures cut the risk for wound complications in half compared to staples. This risk reduction persisted even when data was stratified by obesity levels.

Further studies done specifically on high-BMI women should be done to confirm these findings, but the findings so far seem pretty clear. Using a subcuticular suture to close the incision seems to lessen the risk for wound complications compared to staples.

This is important news because research shows that as BMI increases, doctors are less inclined to use sutures.

In other words, without intending to, doctors may actually be unnecessarily increasing the risk for wound complications after cesarean in women of size.

I'm glad to see that more research is FINALLY being done on how to lessen the rate of complications in women of size who undergo a cesarean.

For years, doctors simply made assumptions about what they thought would improve cesarean outcomes in obese women ─ but they didn't test their assumptions. Once they started testing the assumptions, they found a few surprises.

They assumed that the standard antibiotic dosage for all women was sufficient for high-BMI women too. Yet research shows that standard dosages probably do not provide adequate coverage to prevent infections.

When a cesarean is truly needed, it's a wonderful and life-saving thing to have available. Although cesareans carry more risks for obese women, there are important things that doctors can do to improve outcomes in high-BMI women when a cesarean is truly necessary. This list may now include suturing instead of using staples to close the wound, even if it takes slightly longer to accomplish.

However, let's not lose sight of the fact that the most important step that doctors can take to improve outcomes in obese women is to only do cesareans when they are truly needed.


OBJECTIVE: To compare wound complications between staples versus subcuticular suture for skin closure in obese women (body mass index (BMI)⩾30 kg m(-2)) after cesarean delivery (CD). STUDY DESIGN: We conducted a retrospective cohort study to compare wound complications between staples and subcuticular suture closure in women, with a prepregnancy BMI⩾30 kg m(-2) after CD between 2006 and 2011 at an inner-city teaching hospital. Wound complication was defined as a composite of wound disruption (hematoma or seroma) or infection diagnosed up to 6 weeks postpartum. Variables collected include age, parity, prior CDs, prior abdominal surgeries, incision type, chorioamnionitis, maternal comorbidities (hypertension, diabetes) and gestational age. RESULTS: Of the 1147 women included in the study, women with staple closure were older and had higher BMIs (40.6±9.3 versus 36.1±5.4) and were more likely to be multiparous, have a prior CD, diabetes and hypertension compared with women with subcuticular suture. The overall occurrence of wound complications was 15.5% (178/1147). Women with staples had higher wound complications compared with sutures (22.0% versus 9.7%) with a 2.27 unadjusted relative risk (RR) (95% confidence interval (CI), 1.7 to 3.0) and 1.78 adjusted RR (95% CI, 1.27 to 2.49) after controlling for confounders in the final analysis, including vertical skin incisions. CONCLUSIONS: In obese women, skin closure with staples at the time of CD is associated with a higher rate of wound complications compared with subcuticular suture. Skin closure with subcuticular suture over staples should be considered in obese women undergoing a CD regardless of skin incision type.


OBJECTIVE: We sought to perform a metaanalysis to synthesize randomized clinical trials of cesarean skin closure by subcuticular absorbable suture vs metal staples for the outcomes of wound complications, pain perception, patient satisfaction, cosmesis, and operating time...RESULTS: Twelve randomized trials with data for the primary outcome on 3112 women were identified. Women whose incisions were closed with suture were significantly less likely to have wound complications than those closed with staples (risk ratio, 0.49; 95% confidence interval [CI], 0.28-0.87). This difference remained significant even when wound complications were stratified by obesity. The decrease in wound complications was largely due to the lower incidence of wound separations in those closed with suture (risk ratio, 0.29; 95% CI, 0.20-0.43), as there were no significant differences in infection, hematoma, seroma, or readmission. There were also no significant differences in pain perception, patient satisfaction, and cosmetic assessments between the groups. Operating time was approximately 7 minutes longer in those closed with suture (95% CI, 3.10-11.31). CONCLUSION: For patients undergoing cesarean, closure of the transverse skin incision with suture significantly decreases wound morbidity, specifically wound separation, without significant differences in pain, patient satisfaction, or cosmesis. Suture placement does take 7 minutes longer than staples.

via The Well-Rounded Mama http://ift.tt/2dnTqR4
Posted by Notes From The Fatosphere at 18:04