How to Killjoy an Obesity display one #BodySpectacular at a time 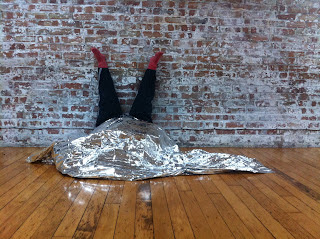 My friend E puts on events and curates things, as is the modern way. Earlier this year she asked if I would like to talk about my book at something she was involved with at the Wellcome Collection in London. For those not in the know, the Wellcome Collection is one of the world's most august museums on medical history. They are very hot on art as a means of understanding medicine and bodies that have been medicalised. Like fat people.

Yet I was daunted. The way in which fat is framed throughout the institution and its sister organisations is very retrograde based on my experiences of rubbing up against it as a visitor and researcher. The public face of the institution's attitude to fat people is located in a display in their Medicine Now exhibit called Obesity. This consists of a sculpture, weight loss technology, diet books, audio recordings of anti-obesity proponents and a token fat woman, and objects implying that people have become less active and over-reliant on labour-saving devices. As a depiction of Obesity Epidemic rhetoric and medicalised obesity discourse, it is pitch perfect. I experience it as a hate zone.

I knew that I would be talking about my book in the lecture theatre on the night, but I also wanted to be in the Obesity gallery. I didn't feel that I could deliver a talk about my book without some comment about the display upstairs. I couldn’t ignore it. I have loathed that display since it was installed in 2007 and I want to see it change to reflect the realities of people like me, and to be approximately a hundred thousand times more critical of the discourse it currently represents.

So I proposed a dance that I would dance with Kay Hyatt in the Obesity gallery. We've been working on a piece that would be suitable, called 'But is it Healthy?' The people at the Wellcome Collection said yes. I said I would make a zine to contextualise the dance, and I did, it's called The Blob. I made some beats to dance to based on some recordings of fat feminists from 36 years ago. I wrote an article about the event for the paper.

I'm making it sound very easy, but the reality is not easy. Another friend, L, said that people would likely tell me how awesome I am, which is nice, but they might not be able to see the risk involved in dancing in such a space.

The risk is I am dancing in a hate zone and that most people are unlikely to understand what that might feel like. Even at this stage in my life it is hard. My hope is that dancing, being there, making a spectacle of myself, might help transform that space. Sometimes I feel hopeful and other times I think I am a fantasist and that nothing can stop the greed and ambition of the weight loss industry. I don't want to bellyache about it too much, it is an amazing privilege to be there at all, I'm so grateful for the invitation and care that has been extended towards me, but it is still complicated and sometimes it sends me into a spin.

Today we did a site visit, I was able to hear the music we will be dancing to in the space and we did a little bit of dancing when no one was looking. I am so moved by the fat feminists who made a path for us all those years ago. When I think of the risks I am taking I am humbled by those women who dared to speak before. They give me a lot of strength. It was amazing to hear them speaking today, to dance to their words which remain so relevant. I felt that I was part of something much bigger than me, that there are many other voices of refusal, not just voices but bodies. I'm not the only one to put myself in a risky place. Those others have given me a lot of courage, they remind me that I am not alone and that this risk is worth taking.

Anyway, here are all the details, downloads and links. Come along if you can but, if you can't, you can still read, watch and listen. My talk on the night will be audio recorded and put on the Wellcome website too.

Paper copies of my zine will be available at the event but you can also download a digital copy.
The Blob (.pdf 4mb)

But Is It Healthy Beats by Charlotte Cooper, featuring Diane Denne, Judy Freespirit, Aldebaran and Judith Stein recorded by Karen Stimson in 1980.

Guardian article (I didn't write that rather boastful title!): The rhetoric around obesity is toxic. So I created a new language for fat people

Please note that you will have to book in advance through the Wellcome Collection website if you want to see me lecture, though this is free. The dance will take place around 9.30pm, no booking is required though these events tend to be extremely popular, so get there early.

via Obesity Timebomb http://ift.tt/2f5I1pA
Posted by Notes From The Fatosphere at 12:03