The Ghosts of Roundups Past, Present, and Future

Hi folks, I know it’s been a while since my last article.  I’ve been stretched a bit thin lately, but I have managed to do a bit of film writing.  Check out my recent article for BitchFlicks on bisexuality in Jennifer’s Body.  I’ve also recorded a small audio essay that is going to be included on FilmJive‘s upcoming episode on music in horror films, also on Jennifer’s Body.  Why was I so invested in examining a film where Megan Fox makes out with a bespectacled geeky chick with messy hair?  The world may never know.

I also wanted to talk a bit about my Monthly Roundup feature.  I just started doing it last year without really explaining why.  At my most prolific (read: unemployed), I write two articles a month for this blog, usually tackling one or two films per article.   However, I see way more films than what I write about, usually at least two a week.  Not all of them have fat characters, not all have fat characters worth writing about, and not all of them can fit in the amount of time I devote to writing CPBS.  But while my articles take a close look at one or two films, I also want this blog to function as a reminder of the overall experience of what it’s like to be a fat person with a deep emotional investment in movies, how I see myself reflected in that respect on a macro level.  So if the Roundup articles seem like weird, arbitrary inventories, I ask that you think of them more like month-sized montages of my personal cinephilic journey as is chronicled here, a condensed onslaught of trite physical jokes, incompetent flunkies, ‘Murrikans, and characters who are coded as fat but who you probably wouldn’t think of as such if you saw them on the checkout line at Target.  (And if you’re at all interested in my hot takes on all of the movies that I see, you can check me out on Letterboxd).

This October, I’m very excited to have two spectacular movie binges on my schedule.  This upcoming weekend, I’ll be at the Music Box of Horrors with my partner Patrick, a 24-hour horror movie marathon hosted by Chicago’s own Music Box Theater.  In addition to my annual write-up of fat characters at the Music Box of Horrors, I’ll be doing the same for the selections I see at the Chicago International Film Festival the following weekend.  One film at the Music Box of Horror this year has already been featured on CPBS:  Abbott and Costello Meet Frankenstein.  As far as #ChiFilmFest, I’m mostly not sure what I’m getting into, but Middle Man does star Jim O’Heir, aka Jerry Gergich from Parks and Recreation.

That being said, I did see several films in September and August that featured fat characters:

I saw this film at the Chicago Critics Film Fest earlier this year, and I liked it so damn much that I took advantage of its theatrical release coinciding with my birthday to see it on the big screen a second time.  Ricky Baker (Julian Dennison) is a great fat character, and he deserves his own article.  Just watch the damn movie.

A fictionalized account of Mozart’s (Tom Hulce) life and death in Vienna from the perspective of his rival Salieri (F. Murray Abraham).  Like any good period drama, the social scheming is as intricate as the music.  The court of powerful Emperor Joseph II (Jeffrey Jones) includes the syncophantic, and fat, Kappelmeister (Patrick Hines).

While a more serious neo-noir from the Coen brothers about chaos breaking out between two organized crime syndicates over a sleazy bookie (John Tuturro), the film does of course include some outlandish supporting characters.  In this case, it’s Johnny Caspar (the late, great Joe Polito), a fat mob boss with a comparably fat wife (Jeanette Kontomitras) and bratty son (Louis Charles Mounicou III).

This dark comedy is loosely based on the careers of real-life Victorian grave robbers William Burke (Simon Pegg) and William Hare (Andy Serkis), who begin to murder people when their natural supply of corpses that they sell to medical schools runs low.  One murder includes the stalking of a fat man (Tom Urie) through the foggy night streets of Edinburgh.  Burke and Hare manage to frighten him into having a heart attack.  Shortly after, on an exam table in a medical school lecture hall, the professor grabs the man’s belly and dramatically declares his cause of death to be gluttony.

It feels downright patronizing to summarize The Big Lebowski on a blog aimed at film geeks.  But to summarize: Joe Polito has a small part as a private eye, the wealthy and short-tempered Mr. Lebowski (David Huddleston) is also a fat character, as is potential car-thief Larry (Jesse Flanagan).  And, of course: Walter Sobchak.  John Goodman’s magnum opus?  Only history will tell. 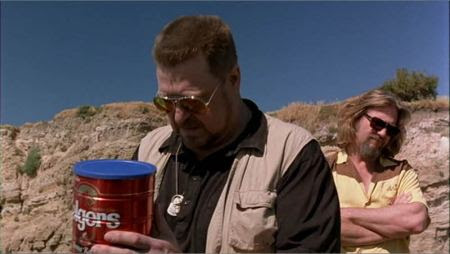 via Consistent Panda Bear Shape http://ift.tt/2e9pWVh
Posted by Notes From The Fatosphere at 22:07