Happy Holidays and almost New Year, everyone! I hope you and your family have been blessed with good food, good times and warmth this frigid season. We’ve been under a cold snap for a week or so and it hasn’t been fun. One morning I walked to work it felt like -41C with the windchill! Hurry up, Spring!

Last night we braved the cold and went over to the movies and watched The Greatest Showman, 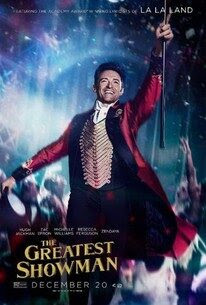 staring Hugh Jackman, Zach Efron, Zendaya and Michelle Williams. Honourable mention to Keala Settle as the Bearded Lady, in which she was wonderful. A lot of what I can say about this movie has already been said; the score and songs are lively and bright, even the more somber pieces, with Hugh Jackman showing us yet again why he is a true Hollywood star. The man can sing, dance AND act, making it seem almost effortless. At one point he’s running through the streets of New York, singing his lungs out, and I believe him. When the movie ended my husband and I turned to each other and said “We have to get this soundtrack!” And we will. My favourite song was This is Me, carried by Keala Settle, which won a well deserved Golden Globe this year.

Zack is no slouch, with his duet with Zendaya being another highlight in the film. Ryan didn’t realize he could sing but I pointed out that pretty much anyone who gets their start with Disney has to be able to sing and dance, and he didn’t disappoint.

The lack of CGI was a treat as a lot of the time it really felt like the characters were in the old building, interacting with each other and the sets. I understand *why* they needed CGI lions and elephants but it would’ve been neat to have real ones for the shows. Some more interaction between characters without Hugh or Zack around would’ve added needed depth to a lot of the circus performers, but at over 2 hours already I imagine those scenes were cut. I have no idea what any of their names are, to be honest, not even Zendaya’s, and that lack of detail bothers me. P.T. Barnum made his fortune and enduring legacy off the backs of these folks and we don’t even really get to know them.  It also touches on the racism at the time without centering it, which is both a positive and a negative.

This is a family friendly film as there is only brawl and a fire, with most of the drama being interpersonal without being violent. It’s a rags-to-riches story in the most literal sense, a good time out that will get your toes tapping, and it’s always a pleasure to see Hugh Jackman on the big screen not tearing out someone’s entrails and screaming.

via Fat and Not Afraid http://ift.tt/2CLqU6O
Posted by Notes From The Fatosphere at 12:06