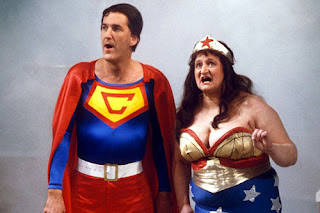 Bella Emberg's death last week gave me pause to think about Blunderwoman, one of the few fat characters I encountered on TV when I was growing up in the UK in the 1980s.

Blunderwoman was the sidekick to Russ Abbott's Cooperman. Abbott, terminally unfunny and over-exposed, created an absurd superhero based on actual comic genius Tommy Cooper. Abbott wrote Blunderwoman for Emberg and she upstaged him every time. One of the most important laws of the universe is that an older fat woman in a sequinned superhero outfit will always outshine anything within a significant radius. The comedy was crude and crass, he gave her an insulting character and she made it her own through sheer force of performance talent and charisma.

Blunderwoman is ridiculous, stupid, clumsy and can't do anything right. As a young fat woman I cringed my way through it, dreading the inevitable playground names that followed each broadcast. Back then, Blunderwoman was my nemesis. I wanted to be treated as fully human and the stereotyping she represented made that impossible.

But something has happened in the intervening years because today I think of Blunderwoman fondly. She is an icon in a cultural desert when it comes to depicting fat women, especially those of us who are older. Yes, she follows the tradition of fat people as butts of the joke, but her wrongness is what makes her so right. There are disappointingly predictable comments about political correctness in this hack piece from last year cashing-in on the release of the Wonder Woman reboot, 'The first time I put the costume on my boobs fell out!' Bella Emberg relives her days as comedy superhero Blunderwoman. But let her cheek and irreverence be a lesson for us all. Blunderwoman, there she is, a far superior role model to Wonder Woman herself.

via Obesity Timebomb http://ift.tt/2mIFPYC
Posted by Notes From The Fatosphere at 09:26