Your Justification For Fat Shaming donald Is Bullshit – Here’s Why 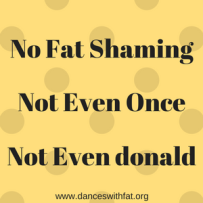 After donald’s recent physical and his physician’s questionable press conference, the internet exploded with all manner of fat shaming of donald, followed by people being called out for, and subsequently attempting to justify, their fat shaming. Y’all, I have seen some nonsense today.

Sadder still, a lot of it came from people who normally get it when it comes to fat activism.  If you’re wondering what constitutes a bullshit justification of fat shaming donald, I’m here to help:

It’s not fat shaming because he is a horror of a human being!

It’s totally fat shaming, even when you fat shame a horrible human being. If you argue that it’s ok to fat shame someone you don’t like, your fat friends and loved ones (and everyone who interacts with you, including co-workers) know what you really think of us – and what you’ll start saying about us if you don’t like what we do.

If you are saying something about donald that you wouldn’t want said about you, or about a fat loved one, you are fucking up. We all fuck up, but there’s no need to get defensive, try justify it, and make it into a permanent state. Admit your mistake, examine your own fatphobia (and remember that we fat people are not immune – we need to examine our internalized fatphobia,) and do better moving forward.

It’s not fat shaming because he (and his doctor) lied about his weight!

Online trolls speculate about the weight of fat people all the time. I know because it happens to me. Do you really want to engage in the same behavior as a reddit troll? You can’t say “it’s not about his weight” if you are talking about his weight. And you can’t call the doctor a liar unless you have proof, or you’re some kind of licensed weight psychic.

More to the point, if you’re angry because you believe that he/his doctor is lying about his weight, you are lending credence to the idea that his weight matters at all. It does not. It has literally nothing to do with anything. I actually saw a fat person claim that while they are fat, they can deal with some fat shaming if it helps bring him down.  Pro tip – he bragged about sexual assault and called nazis “some very fine people.” Claiming that he lied about his weight is not going to be the straw that broke the despot’s back. You’re not hurting donald – you’re just hurting other fat people.

We are talking about a “president” who is a proud racist, misogynist, xenophobe, sexual predator, and white supremacist who lies about nearly everything – including matters of national security. Who gives a shit about his weight or height? Or his doctor for that matter? I certainly wouldn’t put it past him to threaten/pay off/blackmail the doctor, I just think it’s the least of our problems. He’s got republican congresspeople, cabinet members, and the press secretary lying for him about things that affect many people’s  life, liberty and pursuit of happiness, his weight and height don’t affect anyone.

The good news is, by not talking about his weight we can avoid engaging in fat shaming, and stay focused on things that matter.

It’s not fat shaming because it’s about his health!

Not if you’re talking about weight it’s not. Weight and health are two separate things, neither is an obligation, barometer of worthiness, or entirely within our control. Also, this justification moves us from just fat shaming into fat shaming and healthism – not a good look. Again, let’s use our energy to point out the ways at which he is utterly failing and terrifyingly dangerous as “president,” getting him the hell out of the office he stole, and finding ways to negate the dangerous things he’s trying to do until then. Let’s not waste our time and energy talking about his weight and height. There are specific policies in place to deal with a President whose develops a health problem. There are not specific plans in place to deal with a “president” who might get us all killed with a tweet. Again, let’s keep our eyes on the ball (and off donald’s ass.)

It’s not fat shaming because he is a fat shamer himself!

I very seriously doubt that the path to liberation is paved with hypocrisy. Fat shaming is fat shaming no matter who the victim is. If you mention Donald’s weight as part of your criticism of him, you are engaging in fat shaming.

And make no mistake, when you engage in fat shaming, your victim is every single fat person. So don’t fat shame. Ever.

Over the course of eighteen self-paced, content-packed, quick videos you’ll get the tools you need to create healthy relationships with food, movement, and your body, and you’ll map out a path to health that makes sense for you, in an easily digestible format. Built-in tools allow you to track your progress and keep notes individually or as a group.
Price: $25.00 ($10 for DancesWithFat members)
Click here for all the details and to register!

via Dances With Fat http://ift.tt/2FTJX12
Posted by Notes From The Fatosphere at 06:35