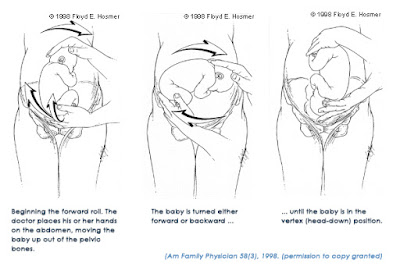 People whose babies are breech and have a history of a prior cesarean are often told that External Cephalic Version (ECV), manually encouraging the baby to turn head-down, is simply not a choice for them. The fear is that manipulation done during an ECV might make the uterus rupture along the scar from the prior cesarean.
We have discussed ECV after a Prior Cesarean extensively before. The results of all the studies so far suggest that ECV after prior CS is not unduly risky and can avoid many unnecessary repeat cesareans. ECV should be offered to women at term with a breech presentation, regardless of prior cesarean status. Unfortunately, ECV is woefully underutilized. One study from New Zealand estimated that only 26% of eligible patients with breech presentations were referred for ECV.

Recently, a new study (Impey 2018) was published that looks again at the question of ECV after prior cesarean (CS). Its results were both encouraging and disappointing.

In this new U.K. study, researchers looked back retrospectively over a 16 year period and found 100 cases where babies of women with a prior cesarean presented breech at term, were offered, and consented to a ECV.

Basically, the study found about a 50% rate of success in turning the baby head-down. Those who had head-down babies afterwards had a trial of labor after cesarean (TOLAC), and 68% had a VBAC.

However, the authors chose to dilute this good news by pointing out that while ECV avoided some cesareans, only 30 women out of the 100 original group had a VBAC. In other words, while they found the practice safe, the way they word the abstract made it sound like instituting a practice of ECV after prior cesarean is not worth pursuing because it is only marginally successful.

This flies in the face of previous research. The big question is why their ECV success rate was so low. Only 50% of their ECV tries worked to turn the baby head-down. That reduced their candidates for TOLAC by half, and then only about 2/3 of these women had a VBAC. That's why the final numbers were low.

If you look at comparable studies, Weill 2016 had a 74% ECV success rate, while Burgos 2014 had a 67% ECV success rate. Why were their results so much better? That's what the UK study authors should be asking themselves. Seems like they need training on how to do ECV more successfully.

The bad news from the study is how few women with prior cesareans are being offered ECV and how low the ECV success rate was. It took 16 years in the study to find a data pool of 100 women who had a prior cesarean and a breech presentation at term who were offered an external version and who accepted it. ECV is tremendously underused, especially in those with a prior cesarean. And a ECV success rate of only 50% is pitiful. Better training is obviously needed.

External Cephalic Version at term can avoid many unnecessary cesareans, yet it is woefully underused in many institutions. It is a reasonable choice that needs to be expanded, especially in women with prior cesareans. Furthermore, training to achieve greater ECV success rates in more places needs to occur.


BACKGROUND: External cephalic version (ECV) in the presence of a uterine scar is still considered a relative contraindication despite encouraging studies of the efficacy and safety of this procedure. We present our experience with this patient population, which is the largest cohort published to date. AIMS: To evaluate the efficacy and safety of ECV in the setting of a prior caesarean delivery. MATERIALS AND METHODS: A total of 158 patients with a fetus presenting as breech, who had an unscarred uterus, had an ECV performed. Similarly, 158 patients with a fetus presenting as breech, and who had undergone a prior caesarean delivery also underwent an ECV. Outcomes were compared. RESULTS: ECV was successfully performed in 136/158 (86.1%) patients in the control group. Of these patients, 6/136 (4.4%) delivered by caesarean delivery. In the study group, 117/158 (74.1%) patients had a successful ECV performed. Of these patients, 12/117 (10.3%) delivered by caesarean delivery. There were no significant complications in either of the groups. CONCLUSIONS: ECV may be successfully performed in patients with a previous caesarean delivery. It is associated with a high success rate, and is not associated with an increase in complications.

Click here for older references on ECV after CS.


via The Well-Rounded Mama http://bit.ly/2CDujqT
Posted by Notes From The Fatosphere at 20:24