This post is to remember and honor one of our Health At Every Size® heroes.

Joanne Pakel Ikeda died on November 27, 2018 at age 74. She was a faculty member of the Nutritional Sciences Department at the University of California, Berkeley, for nearly 35 years. She helped students gain knowledge and skills in nutrition education and counseling.

She was well-known for her advocacy for the Health At Every Size model. In fact, she and Frances Berg coined the phrase. From her obituary:


Joanne was known for her role in the development of a new approach to weight management entitled Health at Every Size® (HAES). Mid-career she came to the conclusion that subjecting large people to food restriction, body dissatisfaction, and size discrimination was futile and only resulted in physical, psychological and social damage to these individuals. She and others determined that rather than focus on weight, the focus needed to be on health. Research showed that many large people could improve all aspects of health with lifestyle modifications unaccompanied by weight loss.

The idea to focus on health instead of weight was a radical, transformative notion in the field of nutrition and medicine and turned the field on its ear. While it has gained a great deal of traction, HAES sadly remains radical to many in those fields, but she never backed down. She was especially determined to protect children from becoming casualties in the “war on obesity” by promoting a Health at Every Size approach for them instead. Here is one of the posters she lent her support to. 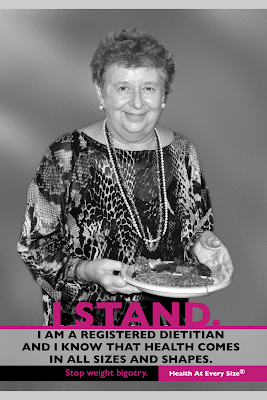 Joanne fought hard for size acceptance for all ages and spoke at many conferences and other occasions about Health At Every Size. She worked with NAAFA (National Association for Fat Acceptance), which is where I met her. She helped establish ASDAH, the Association for Size Diversity and Health. She backed up her beliefs with action by testifying before the San Francisco Board of Supervisors about an ordinance banning size discrimination in employment, housing, adoptions, jury selection and other domains. That took guts.

Joanne did not just specialize in weight-related issues. She also studied the nutritional habits of various ethnic groups, immigrants, and low-income people in California and developed culturally sensitive nutrition education materials. She was a visionary in her field in many ways.

I had the honor and pleasure of hearing Joanne speak in person and getting to chat with her afterwards. She was a warm, unassuming person, but she also knew her research and her points were evidence-based. She was very modest and humble but she also knew how to make a vehement rhetorical point when needed and wasn't hesitant to call out medical professionals on their assumptions and errors. She gave me lots of warmth and encouragement for my work on pregnancy in women of size, which was much appreciated as pregnancy is very much an overlooked area in HAES and size acceptance. As a parent, I particularly appreciated her advocacy for higher weight children in the midst of virulent anti-obesity public health campaigns.

Joanne Ikeda was a god-send to the size acceptance community and people of size, and we will sorely miss her presence and influence. Our hearts go out to her family and friends. 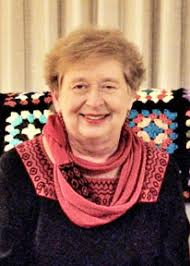 
via The Well-Rounded Mama http://bit.ly/2QJNGax
Posted by Notes From The Fatosphere at 22:36