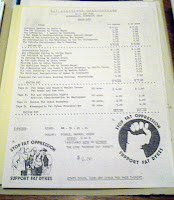 One of the central arguments of my book is that activism does not have to be all about the large-scale actions or the grand gestures. Most fat activism takes place in small ways, a conversation perhaps, or a tiny act. Fat Liberator Publications is a fantastic example of a small-scale intervention that had widespread effects.

Established towards the end of the 1970s in the US by Aldebaran, it mostly consisted of a packet of fat feminist activist articles and papers copied and sent out for a small fee. The packet was advertised in lesbian and feminist journals of the time. Several participants in my research mentioned sending off for these papers by post. At a time when it was quite difficult to find fat feminist information, and when publishers had no interest in the subject, these packets were life-changing. So, for example, Liat recollects:


"I was living in [Michigan] in a group house, and there was a woman there [...] and we were living in this house together and she pulled out this bunch–, and it was I remember they, I think I still have it actually, it was all different colours, stapled, and she was like: 'I think you might be interested in this,' I read it and I was like, SNAP, I mean it was just like a massive connection, light-bulbs going off, you know, and there I was. And I was, like, no turning back."

This packet of papers took on a new life in 1983 when it formed the backbone of Shadow on a Tightrope: Writings by Women on Fat Oppression, an anthology that remains foundational to fat feminism.

The book had a similar effect on readers but it was able to travel further than the packet of papers. One of the most amazing findings in my research was when one participant recalled finding a copy of Shadow on a Tightrope in a Bradford charity shop probably around 20 years after it was published. It's mind-blowing how a modest act – posting out copies of articles – can travel so far in time and space.

I don't have a good photograph of any of the Fat Liberator documents. I was so excited when I found them in the archive that my hands were shaking as I took a snap! What is especially thrilling to me are the t-shirt designs featuring a raised fat fist and a group of fat dykes: Stop Fat Oppression - Support Fat Dykes. Now there's a slogan to get behind.

You can find a set of Fat Liberator Publications at the Mayer Collection in the University of Connecticut's archives. The GLBT Historical Center in San Francisco also has documents relating to Fat Liberator amongst Judy Freespirit's papers. See my post Archiving Fat Activism for more.

via Obesity Timebomb http://ift.tt/24QgHg1
Posted by Notes From The Fatosphere at 03:08