Afro Punk and no fatphobia 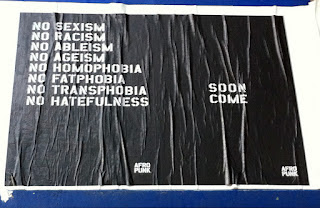 I was on the bus through Shoreditch* yesterday and this fly-poster caught my eye. It's for Afro Punk, which is hosting a festival in London. It gave me feelings!

Firstly the tag-line "soon come" made me long for a time of no hatefulness and reflect on how far away that seems.

Secondly, I was amazed to see "No fatphobia" included with other forms of hate. My dream from early on in my fat activist life has been for the hatred of fat people to be widely understood as a decimating force, as something that kills and ruins people. My fat politics are rooted in intersectional feminism and queer values. For most of my life as a fat activist, fat politics have been regarded as a joke, an attempt to bandwagon-jump; people I've reached out to in similar liberation struggles have turned away and invested instead in obesity discourse. So it is fantastic to see an organisation that has emerged from a US Black punk movement recognising fat in a matrix of hate targets. Thank you Afro Punk for that vision of inclusion. When I saw "No fatphobia" I felt a lot less alone, I felt hopeful and reminded of my solidarity with all people pushed to the margins and fighting for personhood. I felt the warmth of unity and the resolve to keep fighting for it.

Thirdly, I had feelings that are harder to unpick. No hate is reproduced on Afro Punk merch, including t-shirts and sweatshirts. The t-shirts come in 3xl but no bigger. Does that mean that "no fatphobia" is being reproduced on something that excludes fat people?

The contradictions of politics and commerce do not escape me. Afro Punk in London is a festival where you need a ticket to get in. No hate is being mobilised to market things. Is No hate a brand? Are these political sensibilities being commodified? Other anti-oppression politics have been commodified over the years, but this could be a first for fat activism. I don't understand the long-term implications of branding political feelings like these. Making anti-oppression politics hip is certainly a strategy, but what happens when it is no longer fashionable?

I would really like one of those t-shirts though...

*One of London's hipster zones.

via Obesity Timebomb http://ift.tt/1tgbDWa
Posted by Notes From The Fatosphere at 03:44