Fat activism goes to the opera 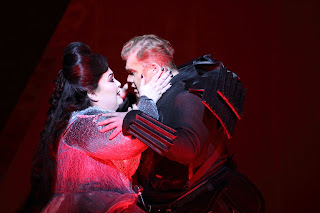 On Wednesday I spent about five hours in a too small seat watching a pair of fat people command a very large stage. I've been to the opera before but not often, I'm not a buff. I like different kinds of music and performance, including, sometimes, that which is ostentatious, epic and expensive.

But it is a blog about fat and this is what I do want to say: if you can pick your way through the things that are problematic, it is fantastic to see romantic, heroic, dramatic fat leads singing their faces off in front of several hundred mostly thin people who have paid a lot of money to witness this extraordinary sight.

It would be nice if the seats were accessible, and if opera singers weren't pressured to lose weight. I am aware that fat opera singers are also a comic stereotype. But whilst many fat activists lobby for non-stigmatising media representation of fat people, and rightly so, there is a genre of opera and singer that takes for granted fat people's compelling presence on a stage. I wouldn't exactly call it mainstream entertainment, but it is entrenched in the establishment. It's right there.

In this production of Tristan and Isolde, Heidi Melton and Stuart Skelton were dressed in giant armour and farthingale respectively, they were really big. Tall hair too. Melton flanked by Karen Cargill as Brangäne, also fat. It's possible none of these performers would want to see themselves as I saw them, you're probably not allowed to say the unsayable, and I notice that reviews are coy in their descriptions of the singers. But what I saw was fat people taking up space and deservedly so. I love fat people who are no shrinking violets. The opera, the music, the scenery, the orchestra, the whole extravaganza was one thing, but to me the fat was far out. There should be fat activist opera groups if they don't already exist.

About ten years ago I went to see one of the Grand Sumo Tournaments in Tokyo. I had similar feelings, only this was a different kind of fat physicality and athleticism, enshrined in national pride. Massively fat wrestlers throwing each other into the air. The most expensive seats are at the very front, where you might find a Rikishi crashing down upon you.

Fat is so weird, hated and also adored. How can it be so?


via Obesity Timebomb http://ift.tt/28S1W6t
Posted by Notes From The Fatosphere at 07:14