I first came across the term 'Research Justice' at the Allied Media Conference in Detroit in 2010. This may have been the first time that the conference scheduled some sessions on the theme. Since then, the AMC has hosted Research Justice network gatherings and the concept has grown. You can find documentation on the AMC website.

As I understand it, Research Justice has grown out of indigenous participatory action research projects. DataCenter, in Oakland, California is an organisational proponent of the term, and has published various toolkits and reports. Research by and about Domestic Workers in Southern California that I have found through DataCenter have made particularly powerful reading. The organisation has a useful YouTube presence too. Last year Andrew J. Jolivette published a Research Justice anthology in Chicago, which looks pretty good but also somewhat academic and focused primarily on work in North America. It is important that Research Justice not become another academic discipline, especially when academia excludes so many, but remains something that anyone can use.

When I was first learning about Research Justice I was also inspired by the Young Women's Empowerment Project in Chicago, who produced a really great piece of research about their Bad Encounter Line. I'm not sure if the project still exists, but you can read about this research on their Media & Free Stuff page.

I have produced my own small-scale research projects using this concept, in particular No More Stitch-Ups, from 2014. My book is built on the idea that how knowledge is generated and owned is political, and that obesity discourse does not have to be the only way in which we might understand fat people.

Research Justice enables me to think of research as activism. It would be amazing is fat people were to undertake their own research, and not only with university support or under the patronage of thin academics. What might we find if we pursued our own research agendas? I am particularly interested in DIY research, using low or no-cost resources to find things out that might benefit communities of people who don't otherwise get a look-in. I am interested in developing research skill-shares around this stuff. It is a myth that research has to be expensive, obscure and highly academic.

I also want to encourage people working in research institutions to consider Research Justice as a form of methodology. There are certainly overlaps with Participatory Action Research, but I think that Research Justice is more than a method, it is a theoretical orientation that can underpin all kinds of research and places a commitment to social justice at its heart.

In June I made a little graphic with some questions to consider when either looking at or designing research. I made the mind-map as a response to a series of performances and workshops in Bristol called Emergenc(i)es, which was about developing new responses to the crises of the times we are in. It was a prompt to think about how to survive and thrive in difficult times. Emergenc(i)es was affiliated to the AntiUniversity a really fantastic para-academic project in the UK. The graphic is not exhaustive, I expect to come back to it and fill in gaps as I go along, but I hope it gives some idea of the critical nature of Research Justice as I see it, and encourages people to think about how knowledge is created, perhaps to become knowledge producers themselves.

Click on the image to see a larger-sized version. Extra point sif you can spot the accidental typo! 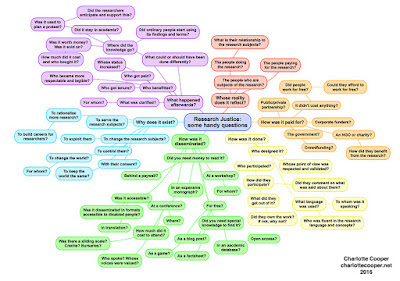 via Obesity Timebomb http://ift.tt/29p6lPS
Posted by Notes From The Fatosphere at 08:04