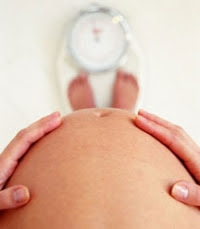 Care providers often push "obese" women to lose weight before pregnancy in hopes that weight loss will reduce complications and make for a healthier pregnancy.

However, one consequence they often fail to consider is that the woman who loses weight before pregnancy often gains excessively during pregnancy.

This is logical; the body thinks it is starving already; once pregnant it feels it has to get even more efficient in order to sustain the mother and provide enough energy for the baby to grow. Thus, the body holds on even more to every calorie it does get and the woman experiences a higher weight gain during pregnancy, even though she may be eating perfectly reasonably.

This is not the first study to find a higher gain in women who diet before pregnancy. Another study in 2008 had similar findings. It noted:


Restrained eating behaviors were associated with weight gains above the Institute of Medicine's recommendations for normal, overweight, and obese women.

And another study from 2013 showed that low-income women who experienced food insecurity and have a history of dieting may be particularly at risk for high gain during pregnancy.

This is especially troublesome considering the intense pressure some care providers place on obese women to restrict their weight gain to almost nothing during pregnancy. It's like they are setting up women of size to fail from the get-go.

A better approach is to encourage women of all sizes to practice Health At Every Size®, which means to place the emphasis on eating well and getting regular exercise without emphasizing weight loss or the scale.

There's nothing wrong with encouraging healthy habits before pregnancy, and this can be an important part of pre-conception care ─ but the emphasis on weight loss before pregnancy at all costs may be counter-productive.


OBJECTIVE: To determine whether a history of preconceptional dieting and restrained eating was related to higher weight gains in pregnancy. DESIGN: Dieting practices were assessed among a prospective cohort of pregnant women using the Revised Restraint Scale. Women were classified on three separate subscales as restrained eaters, dieters, and weight cyclers. SUBJECTS: Participants included 1,223 women in the Pregnancy, Infection, and Nutrition Study. MAIN OUTCOME MEASURES: Total gestational weight gain and adequacy of weight gain (ratio of observed/expected weight gain based on Institute of Medicine recommendations). STATISTICAL ANALYSES PERFORMED: Multiple linear regression was used to model the two weight-gain outcomes, while controlling for potential confounders including physical activity and weight-gain attitudes. RESULTS: There was a positive association between each subscale and total weight gain, as well as adequacy of weight gain. Women classified as cyclers gained an average of 2 kg more than noncyclers and showed higher observed/expected ratios by 0.2 units. Among restrained eaters and dieters, there was a differential effect by body mass index. With the exception of underweight women, all other weight status women with a history of dieting or restrained eating gained more weight during pregnancy and had higher adequacy of weight gain ratios. In contrast, underweight women with a history of restrained eating behaviors gained less weight compared to underweight women without those behaviors. CONCLUSIONS: Restrained eating behaviors were associated with weight gains above the Institute of Medicine's recommendations for normal, overweight, and obese women, and weight gains below the recommendations for underweight women. Excessive gestational weight gain is of concern because of its association with postpartum weight retention. The dietary restraint tool is useful for identifying women who would benefit from nutritional counseling prior to or during pregnancy with regard to achieving targeted weight-gain recommendations.

via The Well-Rounded Mama http://ift.tt/2h7MOGn
Posted by Notes From The Fatosphere at 11:47