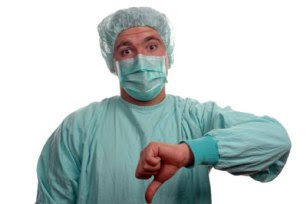 Delos “Toby” Cosgrove, CEO of the Cleveland Clinic, was recently selected by Trump to join an advisory committee that, according to a news release by the administration”brings together CEOs and business leaders who know what it takes to create jobs and drive economic growth. My administration is committed to drawing on private sector expertise and cutting the government red tape that is holding back our businesses from hiring, innovating, and expanding right here in America.”

You may remember Toby from that time he told a New York Times reporter (for an article whose misinformation could be the subject of its own blog post) that he thinks “obesity” is a disease, and that if it were up to him he would refuse to hire “obese” people.  There are massive problems with the idea of considering a body size to be a disease.  There are massive problems with a medical professional insisting that eating less and exercising more “solves obesity” despite the fact that  the research doesn’t, in any way, back him up. There are also massive problems with the Cleveland Clinic’s own wellness program and hospital performance, which wellness expert Al Lewis points out in this great piece.

Those are serious problems, but not the biggest problem here.  The biggest problem is that Toby thinks that “obesity” is a disease,  and he would refuse to hire “obese” people.  So what he is saying is that, as a doctor and healthcare executive, he thinks it’s ok to discriminate against people who have a disease (in this case a disease whose only common “symptom” is the end result of a math equation.)

He is a medical doctor who is literally advocating healthism and sizeism as a hiring strategy, completely disregarding the qualifications of the applicant. And now he is on a forum that’s going to make recommendations to the government about hiring.  Not great news for fat people who want to be hired and paid for our skills, and not based on other people’s bigotry, stereotypes, and misconceptions.

To be clear, donald campaigned on a platform of blatant racism, xenophobia, Islamophobia, misogyny, and anti-queer and anti-trans sentiment, was supported and endorsed by the KKK, and has created his cabinet with people who believe the same, so fat people in the US are among many groups who now find ourselves citizens of a country where members of the administration are excited to oppress us.

Imagine if instead of refusing to hire qualified, talented fat people, we refused to hire bigots to consult with the government about hiring. That would be progress.

Last year 30 people participated in the first ever Body Love Obstacle Course. Some joined on the live calls, and some used the recordings on their own time. Based on their feedback, we’ve created two separate options – the BLOC Power Circle – an intense course that includes a series of live calls and is limited to only 10 people, and the BLOC e-Course which is self-paced and utilizes recordings. Both include the same curriculum and are coached by me, Jeanette DePatie, and amazing guest coaches.

I got everything I hoped and more from this course. I now have an alternative inside of myself – of love and realness – and it keeps getting stronger. This love and realness is pushing out the oppression, and the pain, and body cruelty in my thinking and being. It’s getting so much more fun, interesting and beautiful inside of here! I’m in a growth and stretching phase now, and I’m starting to see the beauty and power and goodness in all bodies, including this one. From my heart and from my body – Thank you thank you thank you.

Super Early Bird pricing is available during the pre-sale until December 15 so
get the details and register here!

Note:  if you are a Danceswithfat member be sure to check your e-mail and/or the member page to get your $50 and $30 discount.

via Dances With Fat http://ift.tt/2gYLI0m
Posted by Notes From The Fatosphere at 06:32