Periodically on this blog, we look at the lives of famous fat people of the past just for fun. So far we've looked at Sophie Tucker and Marie Dressler. Today we are talking about Jane Darwell. 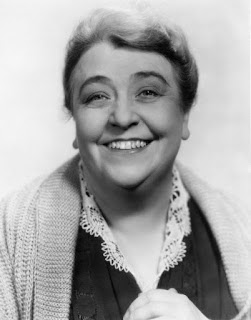 Fat people are tremendously underrepresented in Hollywood, and even when they actually have a decent role, positive portrayals seem few and far between.

It's helpful to remember that there actually have been quite a few fat folk who have quietly had real accomplishments even if they often get overlooked.

Jane Darwell was an actress whose career spanned the stage, silent movies, and talkies, and who won an Academy Award for Best Supporting Actress.

She was born Patti Woodard to a well-off family in Missouri in 1879. Her father was president of a railroad company.

She was bit by the acting bug and flirted with the possibilities of circus rider and opera singer before deciding to become an actress.

In an era when acting was considered a disreputable occupation for women, she chose to change her name to "Darwell" so she wouldn't embarrass her family.

She started her career in stage productions in Chicago, then appeared in her first film in 1913 in her mid-30s. After working in films for a while, she went back to the stage for 15 years.

In 1930, she returned to films with "Tom Sawyer," and thereafter had an active career on both film and stage. The best roles of her career were as an older actress.

Because she was seen as "short, stout, and plain," she always played character parts, usually the grandmother, the housekeeper, etc. She appeared in five Shirley Temple films in those types of characters.

Here she is as yet another maid on the set of "Craig's Wife," looking at a script with Rosalind Russell.

Most often, though, she played the mother of one of the main characters. She was seen as the quintessential mother figure, ironic since she never had children herself. Here she is with Tyrone Power in "Jesse James."

In "Gone with the Wind," she played Mrs. Dolly Merriwether, a Southern matron and society gossip. In this role, she was noted for having a booming vocal and physical presence on screen.

"The Ox-Bow Incident" let her venture outside the narrow confines of the typical mother/older woman role in Hollywood. She wore pants, rode astride, and was a take-charge woman in a sexist frontier town in this old Western about the moral dilemma of capital punishment.

In this role, she was sympathetic in that she was acting outside of gender norms and pushing back against sexist standards, but she was also a complex and dark character because of her blood-thirsty, vicious nature and enthusiastic embrace of hanging a man without a trial. It was a rare departure from the typical roles she played and she dug into it uncompromisingly.

However, it was her role as Ma Joad in "The Grapes of Wrath" (1940) that won Darwell the most acclaim. Her quiet strength in keeping her family together despite the trials of the Great Depression, the Dust Bowl, losing the family farm, and the tough life of migrant farm work was the heart of the film in many ways.

One of her most powerful scenes was of Ma Joad silently going through her things in her house as the family is about to leave it forever. She looks at her mementos, mentally saying farewell, burning most of them because she knows they have no place in her new life. She holds a pair of nice earrings up to her ears one last time, remembering better times but realizing she'll never wear them again. Mournfully but resolutely, she leaves them behind.

The director, John Ford, doesn't rush the scene or clutter it up with dialogue. The lighting by cinematographer Gregg Toland is absolutely stunning. She is seen from behind the shoulder, darkly, in a broken mirror, as if lit by a single candle, highlighting her grief. Her image is striking in its poignancy, heartbreaking in its sorrow, but does not hesitate to show her resolute strength in leaving the past behind and moving on. Nearly every critic cites this scene as one of the best in the movie, with her acting and the stark lighting as its central core.

Darwell played Henry Fonda's mother, and their scenes together are really special. Their bond is crucial to the story and the tragic ending when he must leave the family to protect them. All through the film, they are very reserved with each other, as befits the culture of the people they represent. But they show the special bond between this mother and her son in small ways. By the end, when he sings to her as he dances with her, you can see their rapport. When he has to leave and they embrace one last time, it breaks your heart.

Reportedly, Fonda had to campaign heavily to have Darwell cast as his mother. The director initially wanted to cast someone else in the role instead, someone thinner. But in the end, Darwell's careworn face (none of the actors were allowed to wear makeup) echoed Ma Joad's look perfectly. She was Every Woman facing hard times in the Great Depression.

Some critics have suggested her appearance was too "soft," "dumpy," "porcine," or "plump" for Steinbeck's steely family matriarch ─ as if a fat woman could not still be fat through hard times, or as if fatness could not represent the physical or emotional toughness needed to keep a family together through great difficulties. These comments reflect the authors' biases; Steinbeck's original work states clearly that Ma Joad is heavyset from childbearing but strong from years of hard work.

Although her work was certainly sentimental in the typical acting style of the time, most critics have praised it, calling it a "a performance of quiet strength, dignity, and optimism," and "the performance of a lifetime." Some have even called her performance "one of the greatest mother figures the screen has given us."

Certainly her peers and colleagues seem to have agreed with the latter opinions, awarding her the 1940 "Best Supporting Actress" Oscar for her work in the film, despite stiff competition from some amazing actresses and roles that year.

Through her career, Darwell played Henry Fonda's mother so often ("Jesse James," "Grapes of Wrath," "Chad Hanna," "The Ox-Bow Incident," and "My Darling Clementine") that they joked about it. She said:


I've played Henry Fonda's mother so often that, whenever we run into each other, I call him "Son" and he calls me "Ma" just to save time.

In the 1950s, she began to scale back her roles as she faced health challenges in her 70s. Even so, she appeared in numerous TV shows as well as occasional movies like "There's Always Tomorrow" (1956) and "The Last Hurrah" (1958).

In the 1960s, she was in her 80s and becoming frail. She still made occasional appearances, including on TV shows like "Wagon Train" and "The Real McCoys," working until 1964 and about age 84 or so.

Her final role was as the Old Woman feeding the birds in "Mary Poppins" in 1964. According to IMDB, she refused the role at first, but Walt Disney personally visited her in order to convince her to do the role. It's a small but important part of the picture, a sweet but serious moment that is striking and memorable.
She died a few years later at age 87 (nearly 88). She had appeared in over 170 films.

Jane Darwell is another example that refutes these common misconceptions.

via The Well-Rounded Mama http://ift.tt/2hyvmiM
Posted by Notes From The Fatosphere at 01:03