On fat girls and social justice 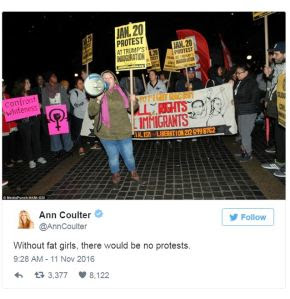 Fat girls have often been at the fore of important social justice movements. We’ve been protesting for women’s rights, indigenous rights, LGBTIAQ rights, rights for those with disabilities, right for those in racial and ethnic minorities, and more. Taking to the streets – taking to the interwebs – taking to our own communities – fat girls have long been adding our voices, and our bodies, to the chorus for social change.

Fat girls are protesting for social change all around the world! 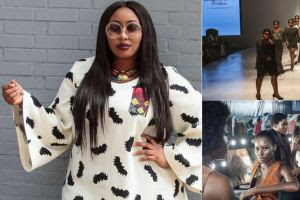 Latasha Ngwube, of About That Curvy Life, helped organise plus-size fashion models taking the stage at this year’s Lagos Fashion & Design Week. The show, #AboutThatCurvyLife Collective powered by Intel, was the first time a plus-size show was included in LFDW and featured collections from four designers.

Charlotte Cooper & Kay Hyatt facilitated the Fattylympics in London in 2012. Pushing back against the nationalist corporate tones of the London Olympics, the non-competitive event was accessible and free, and aimed to celebrate fat activism, body diversity, and bodies of all abilities. Events included twirling, rolling, and spitting on the BMI.  You can read more about it here. 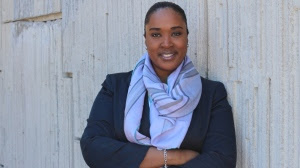 Jill Andrew, of Fat in the City and the Body Confidence Canada Awards, is working to update the human rights code to make size discrimination illegal in Canada. Similar fights are underway in Iceland and New Zealand. 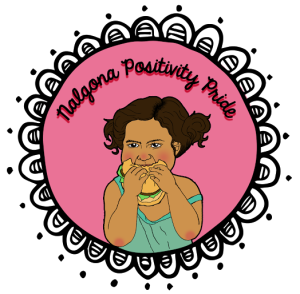 Nalgona Positivity Pride is a xicana/brown*/indigenous group that works to bring decolonisation to the fore of the growing body positive movement. Gloria Lucas started the group as a way to address the white supremacy in eating disorders spaces and treatment. As she writes on her site, “Through NPP, I am able to bring into light that gender, ethnicity, class, and historical & modern day oppression all have a role in the development of violent relationships with food.” 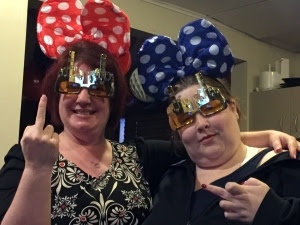 Friend of Marilyn favourite, Substantia Jones, is the host of Fat People Flipping You Off. A fantastic project that is full of pictures and videos of, you guessed it, fat people flipping you off. Substantia writes, “Fat people who’re angry about sizeism, both institutional and individual. Cheesed off about revisionist science, body policing, and implicit weight bias….When words fail, aim it at those who’re immune to logic, reject social justice, or care not about the bigotry of their words and actions”.  If you’d like, you can add yours to the mix! 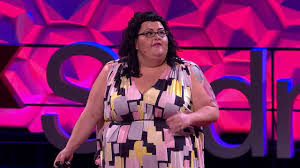 In Australia, Kelli Jean Drinkwater uses art to engage in radical body politics. From her documentary, Aquaporko, to the recent Nothing to Lose dance troupe, Kelli Jean challenges the dominant discourses on size and self through her use of queering fat embodiment and taking up space. Kelli Jean’s TEDx Sydney talk, Enough with the Fear of Fat, was recently added to the main TED page, and has been watched over 600k times. 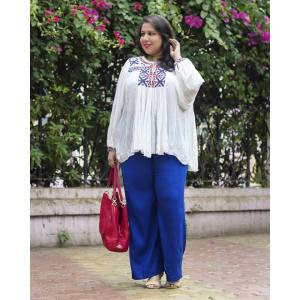 Amena Azeez, of Fashionopolis, uses fashion to challenge people’s perception of fat bodies – of brown bodies – of non-Western bodies. Educating people on fat shaming, and how pervasive it is, is a primary goal. She works to bring freedom of self-expression to fat women in India, and the rest of the world. She’s also active in protesting against social justice issues like #demonitisation.

Coulter’s Tweets are just more fat hate that pile onto the backs of fat people daily. These particular pieces have the intended purpose of keeping people, especially women, silent. Before you decide to exercise your first amendment right to protest, her Tweets imply, consider if you are willing to become a fat joke for millions courtesy of bullies like Coulter. That just might make some people reconsider adding their voice – and that’s exactly what Coulter is hoping. Bullies like Coulter and Trump are afraid of the people, because they know that our collective power – our collective voices – our collective hope – is stronger than they will ever be.

For those of us involved in social justice – or fat politics – or both – we recognize the purpose of Ann Coutler’s message. Fat bodies are undesirable, after all. No one wants to be associated with fatness, especially non-fat people. Calling out protestors as fat is yet another tactic of getting people to be quiet and stay still. After all, you wouldn’t want to be associated with fatness, right? I’m surprised she didn’t include femi-nazi in the Tweet as well.

Our fat bodies make a hell a shield, after all. 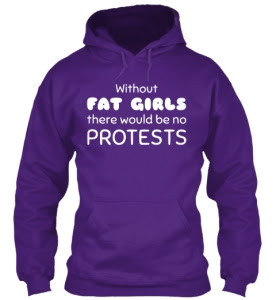 p.s. Want to get a commemorative hoodie? 50% of proceeds go to the American Civil Liberties Union, and they go up to 5x!

via Friend of Marilyn http://ift.tt/2fObo20
Posted by Notes From The Fatosphere at 01:25