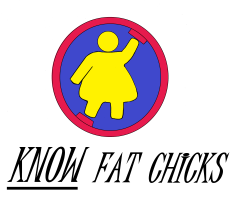 Chrissy Metz is one of the stars of the television show This Is Us.  As is all too often the case, she plays a fat character who is “struggling with her weight”  As is less common, the contract she signed to play the character includes a requirement for weight loss.  She says:

In our contract, it did state that that would be a part of it, to lose the weight in the trajectory of the character as she comes to find herself. That was a win-win for me. Because it’s one thing to try to do it on your own. But as human beings, it’s an ego thing: We’re more likely to do something for someone else.

I just have to be very clear. Whether or not I lose weight or stay the same, it’s purely a choice of mine for health. Not because I think that plus-size, curvy, voluptuous, big bodies aren’t attractive — because I think they’re awesome and sexy.

So I’ll just have to make sure that’s known, because I’m not selling out the big girls. I don’t do that. That’s not me.

As this has been posted to social media by frustrated fat activists I’ve been seeing a lot of questions about why this is a problem, so I thought I would give my thoughts as to the answers:

Lots of fat people do want to lose weight, why are you complaining that her character is one of those fat people?

It’s a problem because almost every fat character who we see on television and in movies is fully invested in fat-hating diet culture. Representation matters, and the fact that almost all media representation of fat people is based on negative stereotypes and diet culture is a problem.  It means that we don’t have role models who look like us (and like looking like us,) and that nearly every time that fat-positive fat people find out that we are actually going to represented (which is, in and of itself, pretty rare in television and movies) it’s not long before we find out that the we aren’t going to be represented at all – the only fat people who are represented are fat people who don’t want to be fat any more.

There are plenty of fat people who aren’t interested in weight loss and we would like to see ourselves represented as well. It’s not just important for fat people, but also for everyone we interact with, whose beliefs and opinions about us are shaped by our media representations as self-loathing stereotypes.

She said that this is about her health, don’t you want her to be healthy?

Also when she says “That was a win-win for me. Because it’s one thing to try to do it on your own. But as human beings, it’s an ego thing: We’re more likely to do something for someone else. ” it makes it seem like that’s some kind of factual statement when, in fact, there is no reason to believe that being forced to lose weight for a contract or for “someone else” will have any more chance of long-term weight loss than any other motivation (which is to say, almost no chance at all.)

What will happen if she doesn’t lose weight?

This is a damn good question. She says it’s about her health but what will she be doing to lose the weight – especially if it’s a contractual obligation?  It’s bad enough to eat less than you need to survive in the hopes that you body will consume itself and become smaller, but we also know that over and over again doctors and pharmaceutical companies have been completely fine with killing fat people in attempts to make us smaller so I can only hope that this doesn’t spiral into something horrific just so that television can create yest another shitty “before and after” weight loss as self-discovery fatty story. And even if she is able to lose weight short term, if she’s like the vast majority of people who regain the weight, what will happen then?

She said that big bodies are awesome and sexy, why isn’t that enough for you?

It’s nice if she thinks that, but my fight isn’t just to be seen as beautiful or sexy, it’s to be seen as a human being and not a walking “before” picture. It’s about having the chance to get actual health care based on evidence-based interventions rather than being prescribed a bag of not-so-magical weight loss beans. It’s about fat people no longer being hired less and paid less than thin people with the same qualifications.  Being seen as sexy is nice, but what I’m talking about here is seeing people who look like me represented in media as fully actualized, non self-loathing human beings, rejecting diet culture and leading amazing lives.

But she says that she’s not selling out big people! She says it right there!

She may well believe that, and that’s great, but I don’t think her actions are necessarily in line with her goals here. If she really doesn’t want to sell out fat people she could say something like “I signed up to play a character with a weight loss trajectory and I agreed to be contractually obligated to manipulate my body size to portray that character.  I want to be clear that weight is not the same thing as health, and that neither weight loss nor health are an obligation, barometer of worthiness, entirely within our control, or guaranteed under any circumstances.  While I may choose to attempt weight loss, I understand that weight loss doesn’t make me better or worse than anyone else, and I also want to celebrate fat people who reject diet culture and live amazing lives in fat bodies.”

Once again, Chrissie Metz – like everyone – is allowed to do whatever she wants with her body for whatever reason she chooses, but that doesn’t mean that those choices don’t add to the diet culture that oppresses fat people. I wish her all the best and I hope that she will work hard to fully support fat people and to reject anti-fat culture even as she tries to manipulate her body size to fulfill her television contract.

via Dances With Fat http://ift.tt/2fghK5O
Posted by Notes From The Fatosphere at 04:10