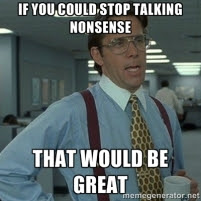 On Saturday millions of people around the world marched in solidarity for progressive, feminist goals*. Enter Mike from Mike’s corner who decided that the best thing that he could contribute was a crappy fat joke: 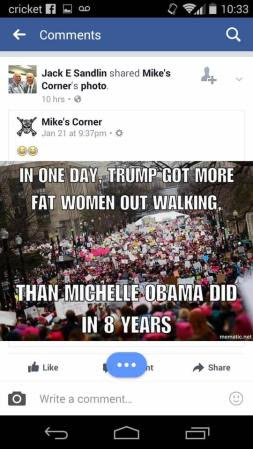 Facebook post from “Mike’s Corner” It’s a picture of a protest march that says “IN ONE DAY, TRUMP GOT MORE FAT WOMEN OUT WALKING, THAN MICHELLE OBAMA DID IN 8 YEARS

This is obviously crap, and I’ve been asked to talk about why so that we can decide how best to respond.  There are several things happening here.

First it’s an attempt at humor based on stereotypes “ha ha fat women don’t usually walk ha ha” Just like people of all sizes, there are fat women who walk (and roll) and fat women who don’t but people who would make this joke are not likely to let the facts get in the way of their bigoted humor. There’s not much to unpack here other than to say that if someone thinks this is funny, they could maybe try to be less of a bigoted piece of shit moving forward.

There’s the issue of this being factually incorrect. Michelle Obama focused on kids (sometimes in ways that were horribly ill-advised) and didn’t have any programs about women walking.  I guess Mike is a fan of “alternative facts?”

The most dangerous takeaway that I’ve seen size bigots suggest is the idea that fat women delegitimize a protest simply by being there – as if the marches would have somehow been more legitimate had all the participants met Mike’s definition of “thin.” This isn’t original, the brain trust who created this meme was beaten to the punch by Ann Coulter (which is to say that this dude is getting his ass kicked by women from every direction.)

The size of the women (or people of any gender) who participated in the marches has nothing to do with anything, and yet fat phobia is so powerful in our culture that the first thing this guy decided to do was try to make a fat joke.  (I will say that I couldn’t find a single march whose platform included anything about size discrimination and so perhaps this will help us explain to organizers of future events why that’s important.)

When we respond to things like this, the most important thing is that we not reinforce the prejudices upon which they are built, or create more bigotry in the process. For this reason we want to avoid the mistake of responding about how fat the attendees were or weren’t, or using comebacks that are healthist and/or ableist.

If this appears in a space that you manage, I would suggest either simply deleting it or pointing out the issues as I have here. (If you’re interested in a discussion of moderating comments in personal online spaces as well as groups we manage online, I  recently wrote a piece for Ravishly about just that!)

If you see it in another space, you might leave a comment pointing out how widespread sizeism is, how messed up it is that women’s worth is judged by how closely we are able to approximate a stereotype of beauty, and how this meme proves the need for such marches.  You could also suggest that the person who posted it try to be less of a bigoted piece of shit moving forward.

If you have other suggestions, feel free to leave them in the comments.

*They are many things to talk about when it comes to these marches and how we can do better moving forward including how they could have been more inclusive of groups like People of Color, Trans and Non-Binary people, Fat Acceptance as a platform and more. These are important discussions that are worth having – cheap fat jokes parading as political commentary are not.

via Dances With Fat http://ift.tt/2j4nD8e
Posted by Notes From The Fatosphere at 03:35