I was recently invited to participate in a fat positive photoshoot with some incredible fat activists. The photos just came out about a week ago with the hashtag: #FatAndFree and I thought I’d talk a bit about the experience and what #FatAndFree means to me.

The photoshoot was organized by Saucye West & Tigress, the photographer was Desmond Rogers. I wasn’t sure what to expect, though the theme was NYE Party, so I brought last year’s New Year’s dress and showed up! Once we set up all of the decorations and everyone arrived, we got ourselves done up and camera ready.

Now, I’ve done some modeling, but nothing professional. I’ve walked a runway for SizeQueen clothing at NoLose one year. I’ve been to lots of events where folks line up to have their pics taken on a red carpet type of thing. I’ve even been an Adiposer and been shot nude by the ever lovely Substantia Jones. But Saucye and Tigress and Magnolia Black have done legit photoshoots before! I felt so awkward and dorky, but hey, in such great company, I just rolled with it as best I could! Ha-ha!

The actual taking o’ the photos part was not easy for me at all. Saucye was on the sidelines cheering me on, offering tips and pointers. Then Desmond said, “Seduce the camera” and I burst out laughing! I said, “Uhh, you’re talking to the wrong gal about that! Hahahahaha!” So Tigress made me a helluva stiff drink and I did my best to just have fun with it. I think it worked out well in the end.

The other lovelies there did so well! They all looked amazing! Then we did our group shots with our fat positive signs and later a fun party toast shoot! So glam! It was such a blast! It had been a long time since I’d been surrounded by such incredible and positive people. It felt so good to just be myself and feel the great energy we all had flowing that night…not to mention the champagne! Ha! It was such a great experience for everyone there that they are already talking about another event like it! I can’t wait to find out more!

#FatAndFree means dressing up, presenting my femme-self to the world and not giving any fucks what anyone else thinks about it!

#FatAndFree means inhabiting this fat body of mine and moving with it, not against it. Supporting my fat body through movement and self care and surrounding myself with fabulous people who lift each other up every chance they get!

#FatAndFree is truly free, it doesn’t cost a thing! 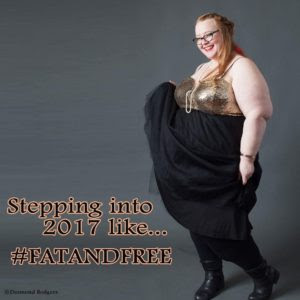 P.S. Check out the hashtag: #FatAndFree in Insta & FB!

via I'm Not Blue at All http://ift.tt/2i0jkgI
Posted by Notes From The Fatosphere at 07:12