Vegan Is Not The Opposite of Fat 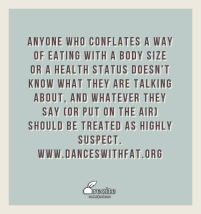 Not satisfied with having had a hand in created the abomination that is The Biggest Loser, produce JD Roth has a new show:

There is nothing wrong with being a vegan, for whatever one’s reasons are.  There is something wrong with acting like “vegan” is the opposite of “fat” or “diabetic” or “unhealthy.”

Why?  Because there are fat vegans.  There are vegans with diabetes. There are healthy and unhealthy vegans (no matter what definition one uses.)  I’m writing about this because a number of fat vegans, diabetic vegans, and “unhealthy” vegans”  have told me about how poorly they are often treated within the community because of the sizeism and healthism that exist in vegan community and are massively perpetuated by the marketing for this show.

Besides the fact that health and body size aren’t an obligation, barometer of worthiness, entirely within our control, or guaranteed under any circumstances, when someone suggests that being vegan will result in everyone being thin or “healthy” (and these are two separate things) they set up the people who are vegan and aren’t thin or “healthy” for the stigma and judgment that they somehow aren’t “doing it right.” And that’s bullshit.

There could be really cool shows about being vegan for those who are interested – with the understanding that this isn’t an option that is accessible to everyone, and that focusing on making sure that each person has access to the foods that they want to eat is the most important thing. But I do not trust someone who produced a show whose goal is to physically and mentally abuse fat people for profit to create a cool show about being vegan.  Especially since they’ve announced that one of the shows features former Biggest Loser contestants (as if the reason that they all gain their weight back is because they eat meat, and not because every bit of research tells us that regaining their weight is exactly what would happen.)

Anyone who conflates a way of eating with a body size, or a health status doesn’t know what they are talking about, and whatever they say (or put on the air) should be treated as highly suspect.

via Dances With Fat http://ift.tt/2i5GPm9
Posted by Notes From The Fatosphere at 05:43