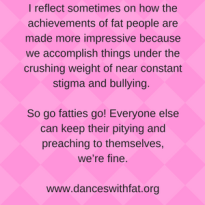 I saw a cooking show recently at a hotel and I made a note to blog about it.  It seems familiar so I looked back and, indeed, it turns out that it was a re-run and I had blogged about it before, so I’m re-posting it. There was a chef whose passion was “healthy cooking.”  She started out by talking about how many people in her family “struggle with their weight”, she teared up as she talked about how sad it was for her to watch.

Then, when she went in front of the judges with a soup that was, to me,  a horrific looking combination of black eyed peas and cabbage – pureed –   she suddenly got angry and went on a rant about how she was “fed up” how there is “no excuse for it.” Happily the judges were not into the attitude which neatly  summed up two reactions that people have to fat people that I find utterly inappropriate and unwelcome.

First – Pity.  Don’t want it, don’t need it, won’t listen to it.  There is nothing pitiable about my body.  As I’ve mentioned before I do not “suffer” from obesity, I do suffer from people’s attitudes about my body.  That’s a suffering that will end as soon as people acknowledge that bodies come in different sizes for different reasons, that there is no wrong way to have a body, and that it’s nobody else’s business at all.  When someone says that they pity me because of my body it indicates that they think there is something superior about their bodies. My body is amazing and I won’t allow it to be treated that way without sticking up for it.  People can keep their pity, and their opinions and assumptions of my body, to themselves.

Preaching is the second issue.  It seems like every time I turn around someone’s trying to score points by giving “tough talk” to us fatties.  Telling us that they are just fed up with us and our big, fleshy bodies like we should care how they feel.  Saying that the world needs to stop “coddling” us, asserting that the world would be better if we didn’t exist,  waging war on us for power, politics and profit.  Suggesting that the problem with fat people is that we’re just not bullied and oppressed enough.  Somehow certain that the reason we’re not thin is that 386,170 negative messages a year about our body are just not enough. That somebody needs to tell us we’re fat. If shaming fat people made us thin, we’d all be thin.

I reflect sometimes on how the achievements of fat people are made more impressive because we accomplish things under the crushing weight of near constant stigma and bullying. Despite the pitying, the preaching, and the constant drumbeat of “your body is wrong”, we keep rising above, keep fighting back.  Just getting out of bed when you know the work water cooler conversation is going to be about weight loss resolutions, or going to the gym when you know the junior high level fatphobia you might face, are gold medal sports some days and we just keep doing it.

So go fatties go! Everyone else can keep their pitying and preaching to themselves, we’re fine.

via Dances With Fat http://ift.tt/2iEZYju
Posted by Notes From The Fatosphere at 05:23