We Are Not Too Much 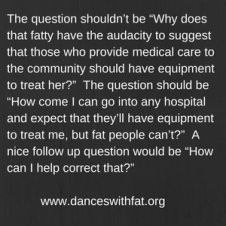 In our culture fat people hear that we’re too much all the time, but absent the complimentary nature. It’s not just those who describe our bodies as fleshy castles or whatever ridiculous fat bashing BS they’re saying.  It’s ingrained in the language – overweight, extra space, plus size.  The (massively mistaken) idea being that there are people who deserve to live in a world in which they fit, but at some point (a point which is pretty arbitrarily assigned and different based on who you talk to, or what plane you’re on) we lose that right.

I’ve talked about this phenomenon, including the fact that it’s acceptable for hospitals – which were built and stocked by people who knew full well that fat people exist – are allowed to simply shrug and tell me that they don’t have beds, or blood pressure cuffs, or equipment, or chairs, or crutches, or wheelchairs, or whatever, that fit me. In a fat hate forum someone said that my saying that fat people should have beds that fit us in hospitals shows that we want the world to “bend over backwards for us.”

I’m here to suggest that we do not have to buy into, or feel bad about, this bullshit argument.  The question shouldn’t be “why does that fatty have the audacity to suggest that those who provide medical care to the community should have equipment to treat her?”  The question should be “How come I can go into any hospital and expect that they’ll have equipment to treat me, but fat people can’t?”  A nice follow up question would be “How can I help correct that?”

We are not too much.  The world is not yet enough.

via Dances With Fat http://ift.tt/2kir53Q
Posted by Notes From The Fatosphere at 01:33